WOMEN UNDER SHARIA LAW: THE DILEMMA OF "THE WIFE BEATING PROTOCOL"
by Al Fadi 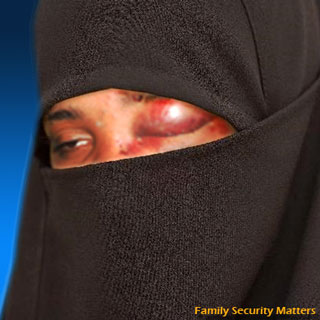 The Quran is the source of all personal status laws in Islamic countries. Therefore, the rules of religious jurisprudence concerning the position and treatment of women are also based on the Quran. In order to fully understand the position of women in Islam, one must first examine the Quranic rules concerning them. Our dilemma in today's article has to do with the Quranic command for husbands to beat their wives.

The Quran gives a man complete authority in marriage: "Men stand superior to women..." (Q 4.34). The Quran justifies giving this authority to the man for the following reasons:

First, preference is given to him by the nature of his physical ability: "God hath preferred some of them over others..." (Q 4.34).

Second, preference is given to him by reason of his financial ability: "and in that they expend of their wealth..." (Q 4.34).

Apparently this higher position of man does not change even if "a woman has enough money to support herself without needing him to spend money on her, or even if she has so much money that she can spend it on him." This preference is because a man has authority over a woman according to the Quran, the ultimate source of Sharia Law, regardless of his or her economic situation.

The leading authorities of Islam state that this ruling of the Quran is an everlasting one as reported by al-Aqqad:

"It precedes the development of civilizations and general legislations and remains past them."

B. Wife's Relationship to Husband

In Islam, the wife is a slave to her husband. The Islamic traditions stress that a woman should obey her husband's commands. The story is told of a man who ordered his wife not to leave the house while he was traveling. During his absence, her father became ill, so she sent to the prophet of Islam asking for permission to go to her father. The response she received was: "Obey your husband." Her father died, so she then requested permission to go see her father's body before burial. Again the response was: "Obey your husband." When her father was buried, the prophet sent her a message saying, "Allah [god] has forgiven her father because of her obedience to her husband." In other words, once married, the woman's complete emotional and intellectual abilities belong to her husband.

In addition to absolute obedience, a woman should revere her husband because Islam teaches that, "If a woman knew the right of a husband, she would not sit at his lunch and supper time until he finishes." One time, a woman came to the prophet of Islam to ask about her obligations to her husband. He said, "If he had pus from his hair part to his foot [from head to toe] and you licked him, you would not have shown him enough gratitude."

Obedience and reverence towards her husband are two of the wife's duties. These duties form an element of worship for her. As the prophet of Islam once said, "If a woman prays her five prayers, fasts the month of fasting, keeps her chastity, and obeys her husband, she will enter the paradise of her Lord." In addition, Allah will not accept the prayer of a woman if her husband is angry with her.

The Quran gives the husband the right to punish his wife if she goes outside the parameters that he draws for her. It provides men with instructions: "But those whose perverseness ye fear, admonish them and remove them into bed-chambers and beat them; but if they submit to you, then do not seek a way against them..." (Q 4.34).

In fact, in reading the verse above one will notice that these instructions were given to the husband concerning a wife whom he ONLY fears disloyalty, not a wife that actually committed a disloyal act. These instructions include the following step-by-step process:

At the beginning of marriage, a husband reminds his wife about the rights that are given to him by Sharia Law. He can say to her, "Fear Allah! I have rights due to me from you. Repent from what you are doing. Know that obedience to me is one of your obligations." If the wife refuses to fulfill the sexual desires of her husband, then he should remind her of his rights over her body.

The Arabic word used in the verse to describe abandonment (hajr) on the part of the husband can carry multiple meanings:

If the previous methods, including instruction and verbal abuse, fail to correct a wife's behavior, then a husband is given the right to beat his wife. Even though verse Q 4.34 does not specify the mode or limit of the beating, it is believed that the prophet of Islam put a condition on the beating, classifying it as "not excessive." As a result, when interpreting the phrase "not excessive beating," scholars offer the following guidelines:

The wife may receive a beating for every behavior that incites the anger of her husband or for every act that her husband does not like. Current Islamic literature supports the legitimacy of beating and its benefit for "upbringing."

For example, the Egyptian scholar Muhammad Mitwalli al-Sha'rawi (AD 1911-1998), who was considered among the top Muslim thinkers in the twentieth century, records his position:

Beating is not a sign of hatred. It could be a sign of love. As long as it is not excessive, it would only cause a small amount of pain. A person might resort to lightly beating the loved one due to desiring what is in the person's [best] interests and due to caring about the person. A woman, by her very nature, understands that, coming from her husband. She knows that his anger at her and his punishing her...will soon pass away and with its passing, its causes will pass. Therefore, they remain in their relationship as if nothing happened.

Ironically, Islamic literature claims that Islam as a religion has improved the position of women and is the only religious doctrine that honors women. History shows that Islam did accomplish some limited advancement in the position of women during the seventh century in certain aspects such as, limiting the number of wives to four in comparison to the practices during that era in the Arabian Peninsula. Conversely, many of the changes implemented by Islam were not positive. The Quran permits men to beat their wives, making domestic abuse a divinely permissible act rather than just an individual behavior.

It is worthy to note that in various ancient societies and throughout human history, women have lived under the oppression of social injustice.

Though in modern society a woman may work and share in the financial burdens of life, she will still be deprived of equality because the Quran commands it so.

Overall, the Quranic rules regarding the treatment of women can still be used today as tools of oppression in the hand of the Muslim man. Any effort she exerts other than that is of no value."

For more on the treatment of women in the Quran, readers are encouraged to obtain a copy of the book: The Quran Dilemma.

Al Fadi is a former Wahhabi Muslim, originally from Saudi Arabia. He is a co-author and editor of the scholarly book entitled The Qu'ran Dilemma. He blogs at
http://thequrandilemma.com/blog.

This article appeared July 13, 2011 in Family Security Matters and is archived at
http://www.familysecuritymatters.org/publications/id.9930/pub_detail.asp