QARADAWI AND THE TREASON OF THE INTELLECTUALS
by Andrew G. Bostom

Last Friday (February 18, 2011) marked the triumphal return[1] to Cairo of Muslim Brotherhood "Spiritual Guide" Yusuf al-Qaradawi. After years of exile, his public re-emergence in Egypt was sanctioned by the nation's provisional military rulers. Qaradawi's own words were accompanied by images and actions during his appearance which should have shattered the delusive view that the turmoil leading to President Mubarak's resignation augured the emergence of a modern, democratic Egyptian society devoted to Western conceptions of individual liberty, and equality before the law.

Egyptian cleric Safwat Higazi can be seen prominently behind al-Qaradawi for the duration of the latter's speech. Recently[2] Higazi, during his Arabic-language program "Age of Glory," broadcast on the Egyptian al-Nas satellite television network, issued an unabashed call for aggressive violent, jihad. He quoted a hadith from 'Ali, the son-in-law of the Muslim prophet Muhammad and Islam's fourth "Rightly Guided" caliph, in which 'Ali tells his sons: "Go, fight, and please your grandfather [i.e. Muhammad]. Let him be pleased with you. Fighting is what pleases the prophet (peace be upon him)." Higazi also urged jihadists, graphically, when attacking non-Muslim infidels to "Strike and split the head, and cut it in half." Equally plain are Higazi's goals[3] for this brutal jihadism — the re-creation of a transnational Muslim Caliphate: 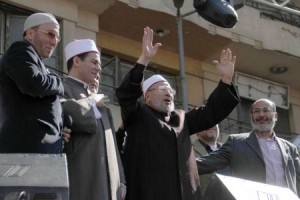 And of course the requisite accompaniment to Higazi's jihadism would be a jihad genocide of Israeli Jews, as described in other media pronouncements the cleric has made, such as,

Contrast the prominence afforded Higazi, with the treatment of Google executive Wael Ghonim. Upheld by a fawning Western media as the putative embodiment of Egypt's "democracy uprising," Ghonim was forcibly barred from the platform where Qaradawi spoke in Cairo's Tahrir Square. According to an Al-Arabiya[9] report,

Ghonim tried to take the stage in Tahrir, but men who appeared to be guarding Qaradawi barred him from doing so. Ghonim, who was angered by the episode, then left the square with his face hidden by an Egyptian flag.

But notwithstanding MEMRI,[10] and my colleague Al-Mutarjim (whose translation[11] follows), no mainstream media outlets have reported that Qaradawi himself issued a clarion call for the jihad re-conquest of Al-Aqsa mosque, i.e., Jerusalem. This pronouncement was met with thunderous applause.

The media's egregious omission was hardly accidental. Qaradawi's statement immediately following this deleted jihad rallying cry — about having the Egyptian Army open the Rafah border crossing into Gaza to facilitate "delivering aid to our brethren" — was widely reported. The deliberate omission of Qaradawi's bellicose incitement to re-capture Jerusalem reflects a larger, sustained campaign by both the mainstream media, and the warped pseudo-academics whom they choose, selectively, to provide their background information. The poisonous fruit of this incestuous relationship has been a concerted effort to characterize as "pluralist, reform Islam" Qaradawi's obscurantist, albeit mainstream Islamic Weltanschauung of Sharia (Islamic Law)-based, aggressive jihadism, and its corollary — virulent Jew, and other infidel hatred.

John Esposito, who heads the lavishly Saudi-funded (i.e., 20 million dollars donated in 2005, according to the New York Times)[12] Center for Muslim-Christian Understanding at Georgetown University, is the doyen of American academic apologists for jihadism. Esposito, despite being a distressingly shallow and transparent strumpet for the House of Saud, who nonetheless continues to proffer geostrategic "advice" on the Muslim world to the American government, opined in a fall 2003 Boston Review[13] essay that Qaradawi embodied a, "...reformist interpretation of Islam and its relationship to democracy, pluralism and human rights."

Nearly a decade later, Esposito's distorted, malignant assessment of Qaradawi has become standard fare regurgitated by both the mainstream media, and the next generation of Esposito-like pseudo-academics these journalists seek out for comment. Witness the New York Times coverage[14] of Qaradawi's Tahrir Square oration. Consistent with the unchallenged Esposito-indoctrinated narrative, we are told that the cleric's speech, "...struck themes of democracy and pluralism, long hallmarks of his writing and preaching." This assertion is followed by a reiteration that "[s]cholars" — doubtless, of Esposito's ilk — "...who have studied his work say Sheik Qaradawi has long argued that Islamic law supports the idea of a pluralistic, multiparty, civil democracy." But then the rather witless Times reporter stumbles when he clumsily invokes his selected "academic Qaradawi expert," Notre Dame Professor Imad Shahin. Acknowledging that Qaradawi has openly endorsed violence against both Israeli Jews, and American troops in Iraq, Shahin, unmasking his own jihadist mindset, stated,[15] "You call it violence; I call it resistance." Earlier[16] at Qaradawi's own website, Islam Online, Professor Shahin decried as the "dismantling of Islam... tearing Islam apart from within," the suggestion that Islam's Sharia-based "hadd" punishments might be abrogated. Shahin argued that these punishments were intrinsic and essential to Islam, concluding,[17]

The marginalization of certain aspects of Shari`ah can have grave consequences in the future...Should Shari`ah be twisted to suit societal behavior or should it be the guide for it?

What are the so-called "hadd" punishments condoned by Shahin, and the "pluralistic" modernist he champions, Qaradawi? Defined by the Muslim prophet Muhammad either in the Koran, or the hadith (the canonical collections of Muhammad's deeds and pronouncements), these draconian punishments include:[18] (lethal) stoning for adultery; death for apostasy; death for highway robbery, when accompanied by murder of the robbery victim; for simple highway robbery, the loss of hands and feet; for simple theft, cutting off of the right hand; for "fornication," a hundred lashes; for drinking wine, eighty lashes. Muhammad Abu Zahra (d. 1974), was a prominent member of Al-Azhar's Academy of Islamic Research, Professor of Islamic Law at Cairo University, and prolific author. These extracts from Abu Zahra's "Punishment in Islam," featured in the seminal 935 pp. Proceedings[19] of the Fourth Conference of the Academy of Islamic Research, September 1968, provide the mainstream institutional Islamic context for the contemporary views expressed by Shahin and Qaradawi:

The hadd punishments being prescribed for the protection of society, their execution is tantamount to an act of worship and equivalent to a holy war [jihad] in the cause of Allah. To purge the community of pernicious elements is a sort of holy war to safeguar/d religion and morals...Hadd punishments are imposed by Allah as [a] deterrent from his prohibitions and the omission of His commandments.

Qaradawi is very much in the mainstream of Egyptian society, he's in the religious mainstream, he's not offering something that's particularly distinctive or radical in the context of Egypt... He's an Islamist and he's part of the Brotherhood school of thought, but his appeal goes beyond the Islamist spectrum, and in that sense he's not just an Islamist figure, he's an Egyptian figure with a national profile.

Yet even this more honest assessment[21] omits any of the ubiquitous concrete examples of Qaradawi's odious vision, articulated, repeatedly in the clerics own words.

During two recent interviews (from 2/9/06,[22] and 9/25/08[23]) published at the Muslim Brotherhood's English website "IkhwanWeb," Qaradawi elucidated his overarching beliefs and goals. He extolled the putative "moderate vision" of MB founder and paragon, Hassan al-Banna. Qaradawi lauds al-Banna's "approach" as representing,[24]

...balance and integration, as it adopts a propagative educational methodology which includes the development of the Muslim individual, family, community, state, and nation, as it seeks to liberate and unite the Islamic nation.

Qaradawi further promoted[25] the notion that the MB govern Egypt, while expressing his personal desire to be a spiritual guide for the entire Egyptian nation, not merely the MB. He also espoused the direct political expression of Islam as articulated by the MB.

One can be content with his role of calling for Islam if he finds that the political duties have been taken care of and that people's needs are being met, but if this is absent then it becomes everyone's duty to take on the political role.

Qaradawi concludes[26] with an ostensible call for "freedom and democracy," but only as a vehicle for the imposition of Sharia — the standard modern era jihadist formulation, "Islamic State by the will of the people."

A vast array of readily available fatwas, sermons, and interviews put ugly flesh on the structural bones of Qaradawi's Weltanschauung as articulated in the 2/9/06,[27] and 9/25/08[28] IkhwanWeb postings. As salient examples, Qaradawi has publicly advocated all of the following:

Julien Benda[39] in his classic 1928 La Trahison des Clercs[40] (The Treason of the Intellectuals) decried with prophetic accuracy how the abandonment of objective truth abetted totalitarian ideologies, which lead to the cataclysmic destruction of World War II. La Trahison des Clercs, or The Treason of the Intellectuals of our time remains the nearly complete failure of Western intellectuals to study, understand, or acknowledge the heinous consequences of the living, corollary Islamic institutions of jihad war,[41] and Jew[42]/infidel hatred.

Lastly, Victor Klemperer, a Dresden University Literature Professor of Jewish descent, recorded the following apposite diary entry on August 16, 1936 in "I Will Bear Witness,"[43] his chronicle documenting the horrific brutality of daily life under Nazi tyranny:

If one day the situation were reversed and the fate of the vanquished lay in my hands, then I would let all the ordinary folk go and even some of the leaders, who might perhaps after all have had honorable intentions and not known what they were doing. But I would have all the intellectuals strung up, and the professors three feet higher than the rest; they would be left hanging from the lamp posts for as long as was compatible with hygiene.

Dr Andrew G. Bostom is Associate Professor of Medicine at Brown University. He is the author of The Legacy of Jihad (2005), and The Legacy of Islamic Antisemitism (2007) -- see http://www.andrewbostom.org/ This article was originally posted at The American Thinker
(http://www.americanthinker.com/2011/02/ qaradawi_and_the_treason_of_th.html)