BETWEEN CAESAR, GOD AND ALLAH
by Edward Cline 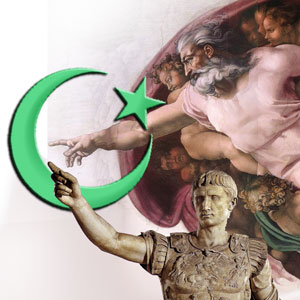 A friend asked why Islam could not separate mosque from state as Christianity, after centuries of turmoil, war, and persecution, was able to separate church from state, and consequently become less of a peril to our freedoms. The first thing to come to mind in the way of a device to illustrate why Islam cannot emulate Christianity was the answer Christ is attributed to have given, in Mark and Luke in the Bible, to Jews about why they should or should not pay Rome's taxes:

Or words to that effect. The wording varies in Mark and Luke and in different editions of the Bible. And interpretations of his words also vary. The most credible one was that his answer was an attempt to avoid being arrested by Roman authorities for incitement to sedition against Rome. If true, his words were in the best tradition of dissimulating political rhetoric.

But, taking his answer at face value, and without wading into a multitude of facets, absurdities, and fallacies in the Christian faith that are germane to the issue, that one statement alone should suffice to illustrate why it is impossible for Islam to be "reformed" to the point that Sharia or Islamic law would be neutralized as a political force and pose no threat to freedom. The plain answer is that there is no equivalent dictum to be found in the Koran, Hadith, or Sunnah. Also, Sharia is so integral to the fabric of Islam, that without it, Islam would be little more than another bizarre cult, and not the ideological nemesis it is.

While both faiths denigrate life on earth as a mere transient form of existence on the way to an ethereal existence in one or another "Paradise" (unless one is destined to go to hell), Christianity historically cut some slack for living on earth. That is, the slightly higher regard for actual existence worked its way over the centuries into the development of political thought. Christianity, while it preached selflessness and living for others, however stressed the ironic importance of a selfish concern for the salvation of one's own soul. The climax of this development occurred in the United States and in the Bill of Rights in the Constitution.

During the Dark and Medieval Ages and throughout the Renaissance, church and state in Europe were in constant conflict. Local European rulers claimed the right to appoint bishops and to skim church revenues, while the Catholic Church contested or denied them the privileges. The conflict between Henry II and Thomas Becket was over the Crown's temporal authority over Church personnel. England's Henry VIII, in pursuit of an heir to his throne, challenged the Church over his marriage, and started his own church. While the Catholic Church's political powers were inexorably waning in the face of moral and intellectual challenges to its doctrines, the Church still wielded enough influence to instigate riots against and persecutions of Protestants and Jews. Catholic doctrine guided and advised kings and princes in the formulation of their policies. Catholic cardinals occupied positions of power in the various European courts.

But one key to understanding the strife and rivalry is that they were centered on who would benefit from life on earth, not on who would go to heaven or hell. The Thirty Years' War devastated Europe not over theological disputes over the Eucharist or the validity of the Trinity. It was about earthly political power. "Caesar" claimed the right to tax and rule over the Church's congregation in this or that nation; the Church claimed the exclusive right to tax and rule over its faithful. Caesar claimed a cut of what was God's; God's representatives wanted it all for themselves in the name of God. It was about hard currency and the material comfort and ease of the governing principals and the assurance of political power of the warring parties.

Ultimately, religion was treated as a matter of personal choice or conscience or belief, protected from the diktats of the state and a bigoted majority. This is not possible in Islam. Islam claims all, or nothing, the "nothing" being the individual who does not submit to and acknowledge Allah as the "One" and Mohammad as his prophet. Islam's religious elements are inextricably merged with its political elements. Islamic scholars emphasize this. Islam Onlinebegins with:

First of all, it is to be noted that Islam, being Allah's final message to humanity, is a comprehensive system dealing with all spheres of life; it is a state and a religion, or government and a nation; it is a morality and power, or mercy and justice; it is a culture and a law or knowledge and jurisprudence; it is material and wealth, or gain and prosperity; it is Jihad and a call, or army and a cause and finally, it is true belief and worship.

There is nothing there or elsewhere on the site about a division of Caesar's and God's due. The one quoted Islamic scholar, Yusuf al-Qaradawi,[1] has his own site, and notes:

Secularism may be accepted in a Christian society but it can never enjoy a general acceptance in an Islamic society. Christianity is devoid of a shari`ah or a comprehensive system of life to which its adherents should be committed. The New Testament itself divides life into two parts: one for God, or religion, the other for Caesar, or the state: "Render unto Caesar things which belong to Caesar, and render unto God things which belong to God" (Matthew 22:21). As such, a Christian could accept secularism without any qualms of conscience. Furthermore, Westerners, especially Christians, have good reasons to prefer a secular regime to a religious one. Their experience with "religious regimes" — as they knew them — meant the rule of the clergy, the despotic authority of the Church, and the resulting decrees of excommunication and the deeds of forgiveness, i.e. letters of indulgence.

By secularism al-Qaradawi implies man-made laws as opposed to Islamic-inspired ones. Allah, per the Koran, views man-made laws as an "abomination." Why? Because they are not his. No other reason is given. Just put up and shut up. It is almost humorous that al-Qaradawi notes that Christian Westerners prefer a separation of church and state because of their experiences with being ruled by the clergy and the despotic authority of the Church, conveniently omitting mention of rule by imams and mullahs and the despotic authority of a caliphate. Further, there is no such thing as "excommunication" from Islam; you cannot leave Islam without inviting a death fatwa, just as one cannot leave the Mafia without expecting to be fitted for cement shoes to "sleep with the fishes."

There is a fanciful Socratic exchange[2] between "Caesar" and an emissary of Islam, Abu Sufyan. Keep in mind that when Mohammad was spreading the "word" by the sword on the Arabian peninsula, the last Imperial Roman "Caesar" had died centuries before, and that one of the last "Holy" Roman Emperors, Constantine XI, died in 1453. It is uncertain which "Caesar" the tongue-in-cheek authors of the Koran meant the person to be.

Caesar: "Then I asked you what he ordered you to do and you replied that he ordered you to offer prayers, give alms, observe piety and chastity, honor your promises and not to commit breach of trust. You have admitted that he has never been dishonest, deceitful and unfaithful. This is how the Prophets of God behave. They are not dishonest, deceitful and unfaithful. In the light of these enquiries I am certain that he is the Prophet of God".

This was an example of how an enemy becomes helpless and humble before a sublime personality and cannot muster up his courage to tamper with the realities.

The last sentence neatly sums up the current Western approach to dealing with Islam.

Neoconservatives also pose a peril. There has been a concerted effort over the last few years by the religious element of the neoconservatives to meld the founding of the U.S. with a religious doctrine, one that is intended to oppose the Islamic one. Their argument is that since all of the Founders and Framers were Christians of one stripe or another, and because God is referred to in the Declaration of Independence ("Nature's God" and "Divine Providence"), ergo, the U.S. was founded as a Christian nation and its laws are based on Christian doctrine.

That is as ludicrous a charge as claiming that because many scientists believe in God and the Ten Commandments and regularly attend church or synagogue, vaccines, drugs, technological innovations, and the Internet are all founded on religious principles. Quite the contrary. Mention of God was, at the time, a fairly common practice in all nations in the texts of their official documents. And the God of the Founders was the "watchmaker" brand, a deity who created the universe, then retired from all human affairs. And, we have this evidence to the contrary enunciated in Article 11 of the Treaty between the U.S. and the Barbary States in 1796-97:

ARTICLE 11. As the government of the United States of America is not in any sense founded on the Christian Religion,-as it has in itself no character of enmity against the laws, religion or tranquility of Musselmen,-and as the said States never have entered into any war or act of hostility against any Mehomitan nation, it is declared by the parties that no pretext arising from religious opinions shall ever produce an interruption of the harmony existing between the two countries.

As religious neoconservatives cherry-pick historical documents to "prove" the religious foundation of America, this is one cherry they leave on the tree. It is irrelevant that Washington reportedly prayed at Valley Forge or that Jefferson regarded Christ as the wisest philosopher. In all other matters, it was not mysticism, superstition, and blind faith that dominated their thinking or guided their actions, but reason.

In summary, Caesar, God and Allah all are contenders for your life, wealth, and happiness. Men who value their lives, however, should ask the question: By whose leave?

Edward Cline is the author of a number of novels, and his essays, books, reviews, and other nonfiction have appeared in a number of high-profile periodicals.