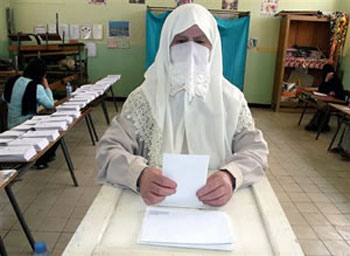 In a February 9th interview of Middle East expert Daniel Pipes by Yosef Rapaport, "Analyzing the Turmoil (in Egypt),[1]" Pipes reveals that while he has an intimate and comprehensive knowledge of Islam and Mideast history and affairs, he is sadly and dangerously ignorant of political philosophy. Pipes' blog site also carries commentaries by guest columnists[2] who echo his fallacies. In this interview, Pipes offers his views on the prospects of Egypt becoming a "democracy."

One can appreciate Pipes' assessment of Egypt and the "regime change" there, and certainly respect his appraisal of Islam and the Mideast, but I shudder every time I encounter an otherwise intelligent and knowledgeable person employing the term "democracy" so carelessly. It is as though Pipes (and many, many others) had never read what the American Founders and Framers had to say about "democracy." They feared and loathed democracy. Democracy, they saw in history, was always an overture to tyranny of one kind or another. Democracy was and remains mob rule. The purpose of the Founders and Framers was to establish an individual rights-protecting republic, one that would be proof against the whims and fashions of mobs, majorities, and power-seeking politicians.

Democracy, for example, is a state or local government banning smoking in private restaurants and bars, because some group with political pull wanted it that way; or Obama patronizing millions of people who want lower health-care costs and endorsing socialized medicine legislation; or state or municipal governments banning plastic (or paper) bags in supermarkets to curry favor with environmentalists. The instances of "democracy" in action are legion, and they all depend on the employment of government force and the diminishment of individual rights.

Democracy is not just about "free elections." What would people vote for in these elections? What would be legitimate issues that could be voted on, and what would not be legitimate issues? Democracy makes no distinctions between these things. Regarding "democracy" a kind of stable political environment that sort of promotes freedom and does not require armies of police to regulate it — such as in the U.S. — is a rather sloppy concept of "good" government. Democracy cannot be equated with limited government. Democracy means unlimited government.

In his interview, Pipes makes a distinction between Islam and Islamism. But what is Islamism but taking Islam's most belligerent or noxious tenets seriously and acting on them? Islam is a totalitarian ideology, pure and simple. This is aside from its primitive, tribalist character. Islam is already a form of "democracy." The majority of Muslims want it, and wish to conform to Sharia law, to worship Allah, honor Mohammad, demand respect, etc. What could be more democratic than that? Pipes would seem to second that evaluation. When asked about the role of "dignity" and "humiliation" in Muslim and Arab culture, he answered: [emphasis added]

They're very important. Islam imbues Muslims with a profound sense of superiority to non-Muslims, and an assumption that the natural order has Muslims ruling non-Muslims. In the modern era, that has hardly been the case, especially a century ago when so many Muslims fell under European rule.

Given his inadvertently damning estimate of Muslims and their world view, one would think he would ascribe the cause of such an inbred pathology to Islam. But he stops short and holds Islam blameless.

Rapaport asked Pipes to compare Egypt with Turkey, "that has a basis in secularism, but a religious party rules it right now. Is there any way Islamism can coexist with democracy? Is there any model for that, in your view?"

Islam is compatible with democracy but Islamism is not. It's like asking, are fascism and communism compatible with democracy? No. Islamism is inherently antidemocratic. It demands that the sovereignty of G-d trumps the sovereignty of the popular will; that the Sharia be applied, no matter what people think; that Muslims have a superior status to non-Muslims; that men enjoy superiority over women; and that violent jihad is a legitimate means of spreading Islam. These are the profoundly anti-democratic qualities of Islamism.

Compare Pipes' answer with Amil Imani's evaluation of Islam in his February 14th article, "Is 'Islamofascim' a Slur?"

Political Ideology: Islam is and has always been political, in the form of Imamate, Caliphate or by proxy where Islam through religious divines controlled the state. Saudi Arabia, for instance, does not even have a constitution. The Quran is the constitution. The country has a king. Yet, the king is the supreme enforcer of the laws dictated by Islam.

In another Islamic country, Iran, where the mullahs rule, the constitution is squarely based on the Quran. Many laws are strictly drawn from the Shariah. The mosque is the state and no other competing political ideology is permitted.

It is apparent that Pipes repeats the same error as President George W. Bush, who alleged that Islam is a "peaceful" religion "hijacked" by "extremists." He sees Islam as a potentially benign creed that must undergo arduous and time-consuming reformation (just as the Christian church underwent centuries of reformation), and Islamism, whose violent nature he asserts but which he cannot account for without repudiating Islam altogether. It is either/or. Pipes attempts to occupy a middle ground.

(It is interesting to note that, according to Imani, Mohammad even stole the name of one of the Meccan idols he ordered destroyed when he "converted" the town: Allah.[3] This may have been a corruption, deliberate or not, of the name of another Abrahamic deity, Jehovah, or variations on that name. Imani's otherwise informative article is soured with an adulatory position on George W. Bush.)

However, most Muslims, like most Christians (and Jews), develop a kind of schizoid ethics when it comes to practicing the creed. They, too, compartmentalize the "truths" to be found in the scriptures and keep them segregated from what thoughts and actions are required in everyday life. Christians, if they attempted to live according to the morality of selflessness and self-sacrifice, which are central tenets of their creed, would be deceased from suicide in a matter of weeks. Muslims, if they attempted to practice literally the central tenets of their creed, would become rampaging hordes and card-carrying Islamo-Nazis.

Similarly, Pipes and other anti-Islamist observers make no distinction between "democracy" and a government that protects individual rights, between one that recognizes no rights and one that does and so promotes the expansion and enjoyment of freedom.

Islam is certainly compatible with democracy — a democracy of, by, and for Muslims only. All others would be at the bottom of the political ladder, paying jizya to the Muslim collective/majority. Islam will not tolerate a "pluralistic" political system. Islam cannot be "modernized." Neither can Christianity be "modernized," only kept divorced from the political life of a nation. But the moral code of Christianity has been secularized in national politics. Else, why the constant appeals to selflessness and self-sacrifice by politicians?

Strip Islam of Sharia law, and what would be left but a cult and the subject of hilarity?

Neither Christianity nor Islam should be cut any critical slack. If the morality is no good for living on earth, if others' well-being and happiness have priority over one's own (or obeying God's or Allah's will, in the way of a Kantian moral imperative), if there is no "practical" application of and end to it except suicide and/or homicide, what good is it and why subscribe to it? Both creeds are antithetical and hostile to reason. Both deny or act to counter man's nature as a being of volitional consciousness, who must choose his purpose for living and act to achieve those goals in pursuit of his own happiness.

Democracy, Christianity, and Islam are all in fundamental opposition to that fact. So one should be less sanguine than is Pipes about Egypt's fate over the next year, or, for that matter, about the fate of any Arabic Mideast country. There are millions of Arabs who are also practicing (and perhaps even devout) Muslims who have not a clue to what individual rights are, or if they are well-read enough in the subject, would be hostile to them because they would see that individual rights invalidate any morality founded on any "I, God, say so, but I am otherwise unknowable until you are dead" mysticism. Democracy, after all, is just another form of mysticism. The collective wish of the "people" will it. Ergo, it is good.

Well, the Germans "willed" Nazism and racial purity through Hitler and hoped they would triumph. The Japanese "willed" Shintoist nationalism through the emperor and hoped it would triumph. Muslims "channel" Mohammad and hope Islam will triumph. As Pipes notes, Islam permits Muslims to regard themselves as superior to all others and as Allah's chosen. This is a hubristic collectivism it shares especially with Nazism.

In another article, "Islam and Democracy — Much Hard Work Needed,"[4] Pipes projects what it would take to "tame" Islam and transform it into just another harmless creed that could coexist with "democracy":

Put differently: of course, Islam is undemocratic in spirit, but so was every other pre-modern religion and society.

Just as Christianity became part of the democratic process, so can Islam. This transformation will surely be wrenching and require time. The evolution of the Catholic Church from a reactionary force in the medieval period into a democratic one today, an evolution not entirely over, has been taking place for 700 years. When an institution based in Rome took so long, why should a religion from Mecca, replete with its uniquely problematic scriptures, move faster or with less contention?

Why, indeed? Why should it even continue to exist? Strip Islam of its appeal to collective superiority — the creed of the second-hander — rip out Sharia law, and what would be its appeal? Why not just join the Amish, or the Mennonites, or the Scientologists? Islamism is Islam, and cannot be reformed. It can only be repudiated and abandoned. The trouble is with religion per se, and not its assimilative capacity with "democracy" or with any other political system.

The United States is now a de facto "democracy," having slid into that perilous status with little or no opposition for over a century thanks to statist legislation that has nullified or usurped any protection against mob rule offered by the Founders and Framers. President Obama is stealthily "progressing" towards authoritarian "democracy" with his most recent legislation and policies, and his authoritarianism is evident in his "soft" approach to Islam, with whose totalitarian nature he has a natural and undeniable affinity.

Amil Imani reaches the same conclusion I have been emphasizing for years: "If Muslims find fascism repugnant, then they should reconsider being Muslims." Islam is anti-life and totalitarian to the core. Even shorn of its brutal, virulent, and belligerent aspects, there are no redeeming features to it. The sight of someone bowing to a rock five times a day hardly comports with the idea of "dignity," especially when one knows that it is in obsequious submission to the commands of a murderous, psychopathic brigand. It does not trigger visions of, say, the climax of Antonio Salieri's opera Axur, Re D'Ormus.[5] It is about as enthralling and ennobling as a college fraternity initiation.

Islam is Islamism. It is not salvageable as a moral guide to living on earth. There is no reason to wish to preserve it in any form.

Edward Cline is the author of a number of novels, and his essays, books, reviews, and other nonfiction have appeared in a number of high-profile periodicals. This article appeared February 16, 2011 on the Family Security Matters website
(http://www.familysecuritymatters.org/publications/id.8741/pub_detail.asp).