THE HATE INDUSTRY: THE PROTOCOLS OF THE ELDERS OF ZION IN A RADIO BROADCAST FROM DAMASCUS
by Reuven Erlich

The Hate Industry: Strong anti-Semitic propaganda employing the The Protocols of the Elders of Zion in a recent radio broadcast from Damascus. Harsh anti-Israeli incitement with anti-Semitic themes consistently appears in the Syrian media. 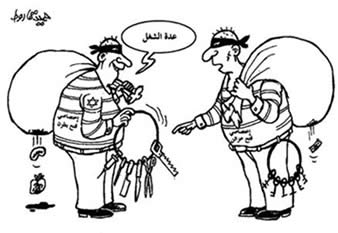 Israelis represented as thieves of Palestinian organs: A safecracker (right) meets an organ thief (left) and asks about his instruments. The organ thief says, "These are my tools." Tishrin, September 17, 2009

A. On December 1, 2009, at 19:07 in the evening, Radio Damascus broadcast particularly offensive anti-Semitic propaganda employing The Protocols of the Elders of Zion and reviling Jewish religious figures. The commentator was the well-known Faez Qandil, who broadcasts the "voice of Palestine" corner on Radio Damascus' "Discussion of the Day" program. He said the following:

B. The article is the rule rather than the exception in the Syrian media, which is generally characterized by strong anti-Israeli propaganda laced with blatant anti-Semitic themes. Such propaganda often appears in the press and on the radio and television, all of which are subject to the strict supervision of the Syrian regime. Bashar Assad's regime proclaims its desire for peace with Israel as a strategic choice, and has again suggested the renewal of negotiations with Israel (on Syria's terms). However, the regime not only does not make the slightest effort to prepare Syrian public opinion for coexistence with Israel and the normalization of relations between the two countries, it consistently permits and even encourages strong anti-Israeli and anti-Semitic propaganda and incitement

Dr. Reuven Erlich is Director of the Intelligence and Terrorism Information Center in Israel. Its website address is http://www.intelligence.org.il