Left: RPG launcher seized on board the Iranian ship off the coast of Yemen (Al-Arabiyya, October 26, 2009)

Right: Mahan-1, the Iranian ship seized off the coast of Yemen (Al-Arabiyya, October 26, photo from YouTube)

1. On October 26, 2009, Yemen announced that it seized an Iranian ship named Mahan-1, loaded with mostly anti-tank weaponry. The shipment was to be delivered to the Houthi Shi'ite rebels, who fight against the Yemeni army in the north of the country, on the Yemeni-Saudi border. The ship had set sail from the Iranian port of Bandar Abbas. Its crew, including five Iranians and an Indian national, were taken for interrogation in Sana'a.

2. Since the renewal of the military confrontation in August 2009, the Yemeni government, headed by President Ali Abdullah Saleh, has repeatedly accused Iran of providing the Shi'ite rebels with military and financial aid, as well as propaganda assistance (through Iran's official media). Yemen even claimed to have intercepted trucks loaded with weapons sent by Iran to help the rebels. However, it is the first time that the government is able to present actual proof (i.e., the seized vessel) of Iran's arms shipments to the rebels.

3. Assuming what the Yemenites claimed is true, Iran's military assistance to the Shi'ite rebels in northern Yemen should be viewed as part of the Iranian regime's larger strategy. Within that strategy, Iran nurtures Shi'ite minorities across the Middle East and uses them to destabilize and weaken Arab regimes, gradually establishing its regional influence and status (placing its own "revolutionary" ideology as an alternative to the peaceful solutions offered by the West).

4. The ship seized by Israel on November 4, which had set sail from Bandar Abbas with a shipment of arms for Hezbollah in Lebanon, is another good example of Iran's policy put into practice. The two recent interceptions (by Yemen and by Israel) show that, as far as Iran is concerned, the sea remains the route of choice for large-scale arms shipments from Iran to conflict zones in the Middle East and elsewhere.

The interception of the Iranian arms ship by Yemen

5. On October 26, 2009, the Yemeni navy seized a ship named Mahan-1, sailing under an Iranian flag, which had left the Iranian port of Bandar Abbas[1] and illegally penetrated into Yemen's territorial water. The Yemeni navy claimed to have confiscated anti-tank weapons found on board the ship, which was meant for the Houthi Shi'ite rebels fighting against the Yemeni army in the north of the country, near the border with Saudi Arabia.[2] The ship's crew, which included five Iranians and an Indian national, were taken for interrogation in Sana'a. According to Yemeni sources, the ship's crew claimed that they came to Yemen in order to evacuate and meet with wounded Iranians who fought alongside the Shi'ite rebels.[3] 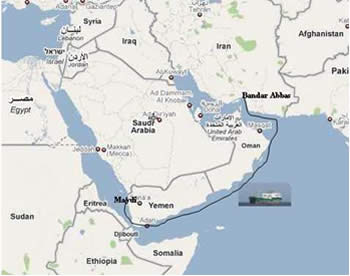 The route of the MV Mahan-1

6. The ship was intercepted near the port of Maydi in the Hajjah Governorate, northwestern Yemen. Yemeni security sources believe that the ship was on its way to unload the arms shipment near the city of Harad, located some 10 km from Al-Malahid, in the Sa'dah Governorate (the area in northern Yemen where the clashes between the Yemeni army and the Houthi Shi'ite rebels take place). The weapons seized on board the ship were to be hidden on a farm and subsequently taken by the rebels.

7. Yemen's Information Ministry spokesman Hassan Ahmed al-Lawzi stressed once again (Yemen Observer, October 29) that Iran continued meddling in Yemen's internal affairs, and said that Yemen had even showed Tehran some documents proving that. He further added that Iran's continuing meddling was driven by that country's religious establishment, which, led by the Arabic-language Al-Alam TV, was turning Iran's media against Yemen.[4]

8. Further on, Yemen Observer cites the Al-Ahali newspaper, which claimed that the Iranian Revolutionary Guards trained the Houthi rebels in Eritrea and even transferred arms from the Eritrean port of Assab[5] to Maydi, Yemen (where the intercepted Iranian ship was supposed to unload its cargo). Yemen Observer added that Abdallah Madhoun, a Houthi leader who had recently turned himself in, said in his interrogation that the Shi'ite rebels received unlimited support from the Revolutionary Guards as well as from Lebanese Hezbollah experts coming from Lebanon.

9. Official Iran continues to call for a peaceful resolution of the conflict in northern Yemen and even volunteers itself as a mediator between the Yemeni government and the Houthi rebels. At the same time, it categorically denies any involvement in favor of the rebels, even though according to all evidence, Iran is stoking tensions by providing the rebels with extensive military, financial, and media assistance.

10. In this context, Iran Diplomasi, a website associated with diplomatic elements of Iran's reformist bloc, voiced harsh criticism of the Iranian double talk on the issue of Yemen. It claimed that Iran's mediation offers were absolutely meaningless as long as Iran was actively supporting the Shi'ite rebels in the conflict. The website further claimed that Iran "humiliated itself by the very act of bringing up mediation offers, while the Yemeni government uncovered more and more evidence of the assistance provided by Iran to the Shi'ite rebels".[6]

11. As a result of that policy, Iran categorically denied that the seized ship was carrying weapons, claiming that it had set sail with no cargo on board from the UAE port of Sharja and was bound for the Caspian Sea via the Red Sea, the Mediterranean, and the Black Sea for commercial purposes. Ship owner Abd al-Latif Meymani also denied having any cargo on board the ship.[7] Iran's Foreign Ministry once again accused the Yemeni press of politically-motivated "media fabrications". Mohammad-Hassan Alizadeh, Iran's ambassador to Yemen, denied the affair as well,[8] while Iran's Defense Minister Ahmad Vahidi once again offered to mediate between the Yemeni government and the Houthi rebels, rejecting the allegations about weapons found on board the intercepted Iranian ship.[9]

The response of Al-Sharq al-Awsat, an Arab London-based newspaper (affiliated with Saudi Arabia)

12. On the backdrop of the reports on the interception of the ship (and the arrest of 11 members of the Iranian Revolutionary Guard Corps by Pakistan after they had infiltrated into its territory), Tariq Alhomayed, one of the strongest critics of the Iranian regime, once again lashes out against it in his column in Al-Sharq al-Awsat. In an article titled "Iran does what it wants", Alhomayed claims that the exposure of the weapons by the Yemeni government shows once again that Iran was a reckless, irresponsible country (even before the exposure of the arms ship which carried weapons for Hezbollah and was seized by Israel). He further adds that alongside such publicly-revealed examples of Iran's subversion and meddling in other countries' affairs, the Revolutionary Guards continue to operate in Iraq and in Lebanon, arming local Shi'ite groups. He concludes by saying that "the Iranian regime's problem is that it has yet to be punished, which is why it hasn't learned the lesson and continues to meddle, directly or not, in the affairs of other countries, while claiming that it is other countries that meddle in Iran's internal affairs".[10]

13. Iran continues its extensive naval activities on the sea routes leading from its ports to Yemen and Sudan in the Red Sea so that it can provide arms and ammunition to boost the military staying power of its proxies, mainly local Shi'ite communities (in Yemen or in Lebanon). At the same time, the Iranians establish their presence in various ports along those sea routes. Iran considers smuggling weapons to terrorist organizations and to subversive groups an important component in its effort to establish its regional posture and to export its political-religious school of thought (striving to undermine the existing regional order and the western Arab Sunni hegemony in the Middle East, supplanting it with the Iranian Shi'ite revolutionary model).

2 On Iran's assistance to the Houthi Shi'ite rebels in Yemen and its regional implications, see our October 1, 2009 Information Bulletin: "Geopolitically strategic Yemen has become a focus of local Iranian-Saudi Arabian strife. The Yemeni government accuses Iran of supporting Zaydi-Shi'ite (Houthi) rebels in the northern part of the country with weapons, money and propaganda. Subverting local Shi'ite populations in the Middle East is a frequent Iranian modus operandi". See also our October 13, 2009 Information Bulletin: "Iranian subversion in Yemen: Iranian websites expose additional evidence of the regime's ideological and religious influence on the Shi'ite rebels in north Yemen and the rebellion's importance for Iran in supporting the Shi'ite minority in the Arab-Muslim world", as well as:
http://www.youtube.com/watch?v=qQN4-YZxBaE.

This Background is taken from Jonathan Spyer, "Analysis: Suddenly, the Arab World Wakes Up to Yemen's Rebellion", December 20, 2009,
http://www.gloria-center.org/Gloria/2009/12/arab-world-wakes-up

"The term 'Houthi rebels' refers to members of the Houthi clan, who have been engaged in an insurrection against the government of Yemen in the Saada district in the north of the country since 2004. The Houthis are members of the Zaidi Shi'ite sect of Islam. (Zaidi Shi'ites venerate the first four Imams of Islam, in contrast to the Twelver Shi'ites dominant in Iran). Led by Abd al-Malik el-Houthi, the rebels are fighting to bring down the government of President Ali Abdallah Saleh, which they regard as too pro-Western.

Thousands on both sides have died in the rebellion. The fighting includes the use by both sides of tanks and armored personnel carriers. It has resulted in the displacement of around 150,000 people.

"The situation escalated in November, when Houthi rebels clashed with Saudi forces in the Jabal Dukhan territory straddling the border. In the ensuing firefight two Saudi border guards were killed and another 10 were wounded. The Saudis responded in force. Saudi aircraft and helicopter gunships carried out a series of attacks on rebel held areas of northern Yemen in the following days, killing around 40 rebels. Saudi forces remain on high alert.

"Riyadh identifies the hand of Iran behind the Houthi Shi'ite rebels. Saudi media outlets in the last month - including the Al-Watan and Asharq Al-Awsat newspapers and the Al-Arabiya television network - have repeatedly made the connection. They assert that Iran is seeking to develop the Houthis along the lines of Hizbullah - turning north Yemen into a pro-Iranian enclave on the Saudi border, with the intention of placing pressure on the Saudis. Saudi media outlets now regularly place the Houthis alongside Hizbullah, Hamas and Muqtada al-Sadr in Iraq when listing Iran's clients in subversion across the region. The Iranians deny these claims. But considerable evidence exists to support them.

"Regarding the ideological and propaganda level - the Bint Jbeil Web site, maintained by Hizbullah, maintains a forum for what it refers to as the 'supporters of truth from Yemen.' The forum includes details and pictures of successful operations carried out by the Houthis, pictures of Houthi leaders and policy statements reflecting the movement's Shi'ite Islamist outlook.

"Regarding direct Iranian military links to the Houthis: the generally reliable Asharq Al-Awsat newspaper in the last days quoted unnamed intelligence sources who described a meeting by a Revolutionary Guards official, Hizbullah officers and representatives of the Houthis on the Saudi-Yemeni border last month. The story was carried also by Al-Arabiya. The intention of the meeting was to coordinate the escalation of the insurgency."

"Iran's efforts in Yemen indicate the unfortunate fate of weak states in times of regional cold war. Yemen has poorly-developed institutions and a divided populace. This has made it particularly vulnerable to penetration by its neighbors and by global jihadi forces.

"In the 1960s, under very different circumstances, Yemen became an arena for the "Arab Cold War" of that time, as Saudi Arabia and Egypt backed rival sides in the Yemeni civil war. Today, in the context of a new cold war, the Iranians are using the country to build up the latest recruit to the region-wide Revolutionary Guards franchise of armed clients.

"As in Lebanon, Iraq, Kuwait, Egypt and among the Palestinians, local grievances are to be utilized to intimidate neighbors and increase the sum total of Iranian influence. In the mountainous, inhospitable terrain of the Saada province, proxy war has returned to Yemen."

Dr. Reuven Erlich is Director of the Intelligence and Terrorism Information Center in Israel. Its website address is http://www.intelligence.org.il