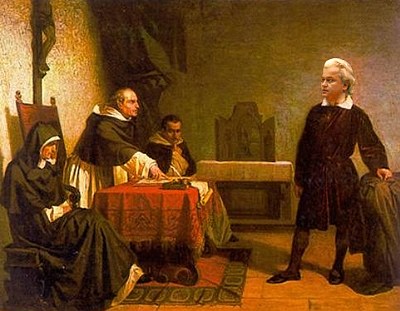 Some observers have compared the ongoing trial against the prominent Dutch Islam-critic Geert Wilders in the Netherlands to the case against Galileo Galilei in seventeenth century Italy. There is no question that the trial against Galileo represents a dark chapter in the history of the Roman Catholic Church, but there are some popular misconceptions regarding it.

The Italian philosopher and occultist Giordano Bruno (1548-1600) was a supporter of the Sun-centered model of Copernicus and championed the idea that the universe is filled with an infinite array of stars similar to our Sun and that life exists elsewhere in this vast universe. He was embroiled in a long trial with the Roman Inquisition and burned at the stake in 1600. His case remains controversial to this day. In author John Gribbin's view he was a religious heretic rather than a "martyr for science", and his execution, while certainly deplorable, happened mainly because of his unorthodox theological ideas, not his scientific ones:

But after 1600 Copernicanism was distinctly frowned upon by the Church, and the fact that Bruno was a Copernican and had been burned as a heretic was hardly encouraging for anyone, like Galileo, who lived in Italy in the early 1600s and was interested in how the world worked. If it hadn't been for Bruno, Copernicanism might never have received such adverse attention from the authorities, Galileo might not have been persecuted and scientific progress in Italy might have proceeded more smoothly.

In 1624, Galileo[1] was assured by Pope Urban VIII that he could write about the Copernican theory as long as he treated it as a mathematical proposition. However, in his 1632 book Dialogue Concerning the Two Chief World Systems he clearly sided with Copernicanism by ridiculing the Aristotelians who clung to the Ptolemaic theory. Because of this he was called to Rome in 1633 to face the Inquisition. He was interrogated[2] for 18 days and threatened with torture. The Pope eventually decided that he should be imprisoned indefinitely.

According to Robert Spencer in his book Religion of Peace?: Why Christianity Is and Islam Isn't,[3] "Jesuit astronomers were among Galileo's earliest and most enthusiastic supporters. When Galileo first published supporting evidence for the Copernican heliocentric theory, Cardinal Maffeo Barberini sent him a letter of congratulations. When Galileo visited Rome in 1624, Cardinal Barberini had become Pope Urban VIII. The pope welcomed the scientist, gave him gifts, and assured him that the church would never declare heliocentrism heretical. In fact, the pope and other churchmen, according to historian Jerome Langford, 'believed that Galileo might be right, but they had to wait for more proof.' And that was the ultimate source of Galileo's conflict with the church: he was teaching as fact what still at that time had only the status of theory. When church officials asked Galileo in 1616 to teach heliocentrism as theory rather than as fact, he agreed; however, in 1632 he published a new work, Dialogue on the Great World Systems, in which he presented heliocentrism as fact again. That was why Galileo was put on trial for suspected heresy and placed under house arrest. Historian J. L. Heilbron notes that from the beginning the controversy was not understood the way it has been presented by many critics of the church since then."

Here is what author James Evans says in his book The History and Practice of Ancient Astronomy, page 424:

Copernicus's book did not produce an immediate upheaval. However, it certainly did offend the sensibilities of conservative religious thinkers, as well as professors of Aristotelian natural philosophy. With the crackdown on freethinking associated with the Catholic Counter-Reformation, any heterodox opinion became more dangerous than it had previously been. But it was not until 1616 that heliocentrism was officially declared erroneous. De revolutionibus was placed on the Index of books that were prohibited 'until corrected.' In principle, De revolutionibus could be circulated and read only if erroneous passages (asserting the mobility of the Earth) were removed. Four years later, a list of ten specific corrections was issued. Owen Gingerich has examined nearly all the surviving copies of the 1543 and 1566 editions of De revolutionibus, which total more than 500 books. The majority of copies in Italy were censored in conformity with the decree. But the decree had almost no effect elsewhere. Not even in Catholic Spain or Portugal were copies censored. The condemnation of De revolutionibus had very little impact on the acceptance of the heliocentric hypothesis. Even the famous trial of Galileo for continuing to advocate heliocentrism after the condemnation only served to popularize the new cosmology.

The case against Galileo may have had a negative impact on Italian science, but its long-term impact on Europe as a whole was quite meager. One of Europe's greatest comparative strengths has always been that no single authority, secular or religious, could successfully censor the flow of ideas throughout the entire continent. This was very different from, say, Imperial China at the same time. Yet today we have the European Union, which has powers of censorship and indoctrination that the Roman Inquisition could only dream of.

Galileo faced the possibility of torture during his trial, which Wilders currently does not. It was also possible to be executed for heresy in the seventeenth century, as had happened to Bruno a few years before. Many people will say that this is not the case with Wilders today, but the truth is that he risks his life every single day by saying what he is saying, and the security at the Dutch trial is not good. The trial itself exposes him to an elevated risk of assassination, in a country where several critics of Islam have been assassinated. In my view, the Dutch politician Pim Fortuyn was executed as a Multicultural heretic. The political elites killed him by whipping up hatred against him, even if they didn't physically pull the trigger.

Another major difference is that as bad as the case against Galileo was, he was at least allowed to talk about the Copernican hypothesis as long as he presented it as a mathematical hypothesis only. Wilders isn't even allowed to say, hypothetically speaking, that Islam might be an unusually violent religion, which arguably means that there is even less freedom of speech under the Multicultural Inquisition in 2010 than there was under the Roman one in 1633. Also, the stakes are far greater now than they were back then. The trial against Galileo didn't change physical reality or threaten the survival of European civilization; the forces that Wilders is warning against could indeed destroy European civilization if left unchecked.

Galileo was found guilty of heresy and remained under house arrest for the remainder of his life, but he nevertheless managed to publish a masterpiece in 1638, the Discourse on Two New Sciences, of a history of physics in which he presented the laws of accelerated motion and falling bodies. Symptomatically, it was smuggled[4] out of Italy and published in the Netherlands. Could Italians return the favor and publish the defense from the trial against Wilders, in the spirit of Oriana Fallaci? Perhaps the Vatican itself can make up for its old sins?

Unfortunately, I fear that the Roman Catholic Church is currently too dhimmified to do such a thing, but it would undoubtedly have a tremendous symbolic value if the Church dared where the secular and so-called liberal authorities of the Netherlands and the EU dare not.

Fjordman is a Norway-based writer. He is a noted blogger who writes analytic and original essays on Islam, Scandinavian affairs and global politics. He is a frequent contributer to Brussels Journal, Gates of Vienna, Faith Freedom International and Jihad Watch, among other websites. This appeared February 1, 2010 on the Gates of Vienna website http://vladtepesblog.com/?p=18945.