THE COLONIZATION OF THE CONFLICT
by Seth J. Frantzman

Recent revelations that European embassies and the EU fund several radical Israeli 'human rights' organizations begs the question: to what degree is the conflict between Israel and the Palestinians choreographed and colonized by outsiders? In the weekly protest at Bil'in Palestinians once again threw rocks at Israeli soldiers and attempted to break through the security fence. But as with every week there were more foreigners than Arabs. Even the Arabs that come aren't from the villages nearby: the army meets with the heads of the village in order to explain to them what modes of protest are acceptable. The weekly event is like a play or a sitcom that is staged again and again; the format is the same every time.

So why does it go on? The protestors don't have an actual goal. They claim to be "Anarchists Against the Fence" or "peace activists" but the events at Bil'in aren't peaceful and nor is there any realistic expectation among the protestors that their weekly event will actually affect the fence. Nor is the fence in that area particularly egregious, it deviates from the Green Line by less than 2 kilometers and it doesn't bisect Arab homes or anything of that nature. The claim that it is on the "land" of Bil'in is only true insofar as it is on land near the village, not land that is or was actively used by the villagers.

So why does it go on? It goes on because those who arrive there have a vested interest in having it go on. Websites (such as Bilin-village.org) devoted to the protest at Bil'in stress that many important people and organizations have joined the protests including the Israeli Jewish organization "Physicians for Human Rights", the International Solidarity Movement (ISM) and Gush Shalom (another Israeli 'peace' organization). It is a mandatory stop on any protest-tourists visit to the Holy Land. And it is the place to get wounded for foreign protesters. 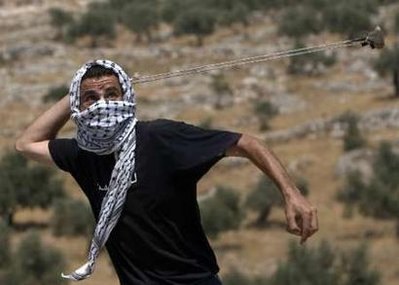 A Palestinian uses a sling to hurl stones toward Israeli soldiers in Bilin near Ramallah July 10, 2009. (Reuters: Fadi Arouri)

Thus European Parliament vice-President Luisa Morgantini and Julio Toscano, an Italian judge, were injured at Bil'in in June of 2008. Mairead Corrigan, who won a Nobel prize for "peace" work in Northern Ireland, was hurt in an April 2007 protest. Lymor Goldstein, an Israeli lawyer was wounded in 2006. But these people aren't wounded accidentally or because the soldiers intend to wound them, they are wounded because they want to be wounded. They chose to be wounded as a way of receiving a sort of protest badge of honour.

No one is more emblematic of the symbiotic relationship between protestor and Bil'in than Jonathan Pollak, a leader of Anarchists Against the Wall. A graphic designer who grew up in Tel Aviv (and now lives in posh bohemian Jaffa), he is an Israeli Brahmin, being the son of actor Yossi Pollak, brother of actor Avshalom Pollak and film director Shai Pollak. He has supposedly been involved in over 300 demonstrations. As part of his work with ISM he even toured the U.S on a fundraising mission in 2005. This type of protest-tourism isn't about protesting a legitimate cause, it is about a way of life, where the protest is not the means but the end in itself. Were the wall to disappear the protest would have to go on because so much is invested in it.

Consider the amount of money that goes in to funding the foreigners who attend the Bil'in protest. Consider the air fares, the hotel accommodations and transport to and from the site. Consider the websites, the numerous organizations and the media attention. When Naomi Klein, a Canadian author, visited Israel in June to launch her book The Shock Doctrine in Hebrew she made the required pilgrimage to Bil'in and voiced support for a boycott of Israel: "It's an extraordinarily important part of Israel's identity to be able to have the illusion of Western normalcy..When that is threatened, when the rock concerts don't come, when the symphonies don't come, when a film you really want to see doesn't play at the Jerusalem film festival... then it starts to threaten the very idea of what the Israeli state is." 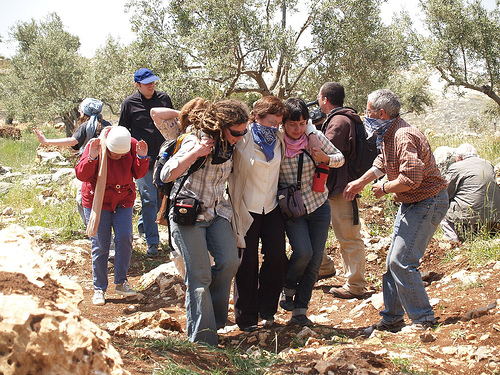 The Israeli-Palestinian conflict is a very real conflict. But there is another side to it as well that is simply entertainment for the West. This includes the disproportionate coverage in the New York Times and BBC that covers the most minor people, incidents and events here, especially if they have olive trees in the background. The 'peace' organizations that are involved in the conflict have a vested financial and personal interest in it continuing. Without the conflict they would have nothing to do. That is why 'peace' activism at Bil'in doesn't take the form of peaceful protest, but of rock throwing and assaults designed to encourage tear gas and rubber bullets from the IDF which are needed for people to claim they were "injured", all in front of the cameras.

That isn't peace, it is a manufacturing of the conflict, manipulation of the conflict for the cameras. Were the conflict to go away the legions of people like Mr. Pollak and Ms. Klein who make it their life would no longer be "activists" as a job description. People don't work against their self-interest. If their job is "peace" they live for war because without it their life's work would disappear. Furthermore, without Bil'in where would Europeans and Americans go for a protest tourist vacation in the summer? 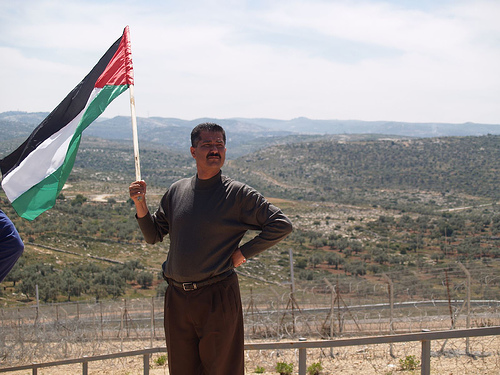 The caption reads: "The people of Bil'in and their Israeli and international solidarity friends will be back next Friday, to continue their non-violent struggle against Israeli Apartheid and land theft."

Seth J. Frantzman is a graduate student in Islamic and Middle Eastern Studies, living in Jerusalem. Contact him at sfrantzman@hotmail.com and visit his website: http://journalterraincognita.blogspot.com