PALESTINE IS GENOCIDE
by Daniel Greenfield 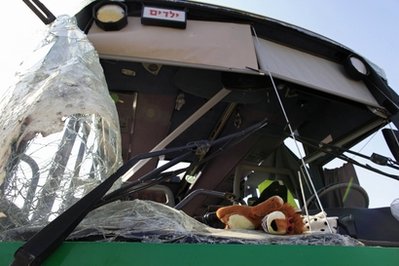 On the 11th of March, two Arab Muslim men climbed through the window of a home[1] in the village of Ithamar, and massacred an entire family, killing both parents, stabbing a 4 year old boy twice in the chest, murdering an 11 year old while he sat up reading in bed and slitting the throat of a 3 month old baby girl.

A week later, Israeli and Arab pollsters conducted a survey[2] in the West Bank, Gaza and Jerusalem. A third of the Arabs surveyed supported these atrocities.

The Arab Muslims who approved of the attack gained nothing from their deaths. The dead children were not soldiers. They were not killed as collateral damage. Their deaths had no strategic value. There was no reason to kill them, but for the sake of killing them.

Thursday afternoon, Muslim terrorists[3] carefully timed a school bus route and hit the bus. The bus had been full of students, but luckily most had gotten off before the attack took place. It wasn't the first time they had deliberately targeted school buses. The most famous of which was the Avivim School Bus massacre[4] all the way back in 1970. That same day a kindergarten was hit by a rocket. Schools have been frequent targets of Muslim terrorists. So have pregnant women. There's a word for all this. Genocide.

Deliberately targeting children has only one tactical purpose. The extermination of an entire people. Had the Muslim world really wanted a Palestinian state, they could have created one by accepting the UN partition plan, or at any time between 1948 and 1967 when Gaza and the West Bank were in their hands. Had the Israeli Arabs who dub themselves 'Palestinians' wanted a state of their own, they could have had one between 1992 and 2011. They don't want a state. What they want is a state of war.

Genocide cannot be resolved by territorial compromise. People who approve of slitting a baby's throat and stabbing a 4 year old in the heart are not out for an extra kilometer here or there. The Nazis were not going to be appeased with the Anschluss or the Sudetenland — and Muslims are not going to be pacified with partial control over East Jerusalem. It isn't East Jerusalem that they want. Or even all of Jerusalem. Or even all of Israel. What they really want is a reason to keep killing.

A man who murders a child might be insane, but millions of people who act and think that way are not insane. They have developed a moral code that says their victims are subhuman, while they are the 'True People'. That code allows them to act out their worst impulses in the name of an ideal. Whether that ideal is the Third Reich or the Caliphate doesn't matter at all. The ideal is there to justify the atrocity. 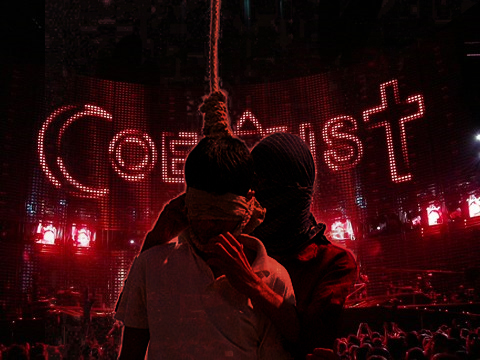 Liberals may plant Coexist stickers on their bumpers decorated with a string of religious symbols beginning with the Islamic star and crescent, that renders it first among equals — but it is all in vain. On his deathbed, Mohammed proclaimed that,[5] "two religions cannot coexist in the Arabian Peninsula". You may cry peace, peace — but there will be no peace. For the Prophet of Islam has commanded it. There can be no peace or coexistence. Only servitude, genocide or resistance. If you refuse to serve, then you will be massacred or driven out. That sentence is all you need to know to understand the Islamic war of extermination against Israel.

Palestine is genocide. It is genocide under the cloak of nationalism. Genocide under the facade of retaliation. Genocide dressed up as righteousness. Genocide disguised as the outcry of the oppressed. The Nazis dressed themselves in that same garb. They were the victims fighting back against oppression and they went on being the victims until they drowned half the continent in blood. The law of the beast is cunning, and the name of the book of the beast may change, but its end is always the same. The beast wants power, it wants glory and wealth — but above all things it wants blood.

To create a state inside Israel, a third of whose inhabitants are openly unashamed to say that they support the murder of children is no different than setting up a Nazi state in that same territory. It is not peace. There is nothing peaceful about it. It is every bit as peaceful as Islam, and as the years since the Oslo Peace Accords were signed have been. Though the cry of peace is constant, the call of the Muezzin silences it. Silences it with the peace of the dead. The voices of lost children sealed up in their graves.

Time has passed. The small graves grow. And there is no Palestinian state. Not for lack of trying. Year after year, the peace envoys go out from America and Europe. Time after time, Israeli leaders make their offers, the negotiations stall and the cemeteries fatten with the dead.

Like a flag waved before a bull, Islam waves peace before the world. Behind the flag is the sword. The Muslim watchers in the stands understand the game. They have played it since the time of Mohammed, offering empty truces and false promises. All these are a distraction. A charade. Only the sword is real. And when the bull has been weakened enough by the lances, when it stumbles desperately for peace, that is when the sword thrusts.

Palestine is not even the sword, it is the flag. The distraction so that no one sees that this war is about what Muslims have been doing to non-Muslims since Mohammed began his war of terror against the peoples of the Middle East. "Let the Israelis make their state, and we will make a counter-state. A state whose only purpose is the destruction of their state. A null-state of eternal grievance and unending wrath. A hole in the world for all the good and bad intentions of the world to fall into." Look at the flag of Palestine. All we want is a state. Try and give us one, and watch the sword tear it through. 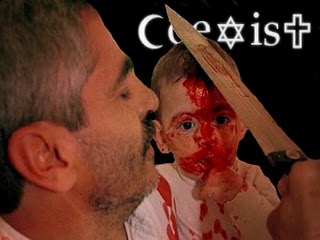 To call for a Palestinian state is to call for genocide. There is nothing peaceful about a call for genocide. It is not possible to peacefully implement genocide. Every mention of a Two State Solution is an encouragement to further violence and murder. A reward for the butchers who have been at this business for some 1300 years. Urge the creation of a Palestinian State and you might as well call for the resurrection of the Third Reich. There are linguistic and cultural differences, but both follow the law of the beast. Let there be no more lies about good intentions and no more self-deceit about the search for peace. The road to Palestine does not lead to peace, but to the cemetery.

It is time to stop the lies and tell the truth. The call to peace is the call to death. To promote the creation of a Palestinian state is a violent act. The peacemakers are collaborators in genocide. Their charges are the murderers. Palestine is genocide. It is the cultivated work of an ideology that has successfully turned millions of people into born serial killers or their accomplices. Its two political favorites are Barghouti of the Al-Aqsa Martyrs Brigade and the Hamas leadership. Their only accomplishment is the death toll, their house of state is the cemetery and their constitution is the ravings of a bigoted murderer. To stand for them is to stand for murder. To stand against them is to stand for life.

EDITOR'S NOTE: Several of the Readers' Comments amplify the points made in the essay:

Daniel Greenfield is an Israeli-born artist, writer and freelance commentator on political affairs with a special focus on Jewish concerns and the War on Terror. He maintains a blog at www.sultanknish.blogspot.com.

This article appeared April 9, 2011 on the Sultan Knish website
http://sultanknish.blogspot.com/2011/04/palestine-is-genocide.html