On December 11, 2009, a group of Palestinian Christian leaders issued a 13 page document known as "Kairos Palestine-2009: A moment of truth." Having "reached a dead end" because of the "Israeli military occupation," the leaders appealed to churches worldwide to treat Israel as they had apartheid South Africa by divestment and economic boycott.[1]

Given that the authors of this document include Patriarch Emeritus Michel Sabbah from the Latin Patriarchate of Jerusalem, the Lutheran Bishop of Jerusalem Munib Younan, Archbishop of Sebastia Atallah Hanna from the Greek Orthodox Patriarchate, we should not be surprised with this distorted description of the plight of Christian Arabs in Gaza, Judea and Samaria.

Justus Reid Weiner, an international human rights lawyer, warns that the present Christian Arab leadership is not telling the truth about the real conditions in these areas, and who is really responsible for perpetuating the anguish of Arab Christians. The "patriarchs and archbishops of Christian Arab denominations," he says, "who are currently deceiving the international community, are self-interested people. They collaborate with the Muslim perpetrators of intimidation and violence. Against all evidence they claim that the Christians Arabs are living comfortable and prosperous lives. In fact the present situation is growing worse by the day."[2]

Though these false accusations are not new, there is a danger they could change the way some of Israel's Christian supporters view the Arab/Israeli conflict.[3] That is why we need to examine what is really transpiring in these areas. 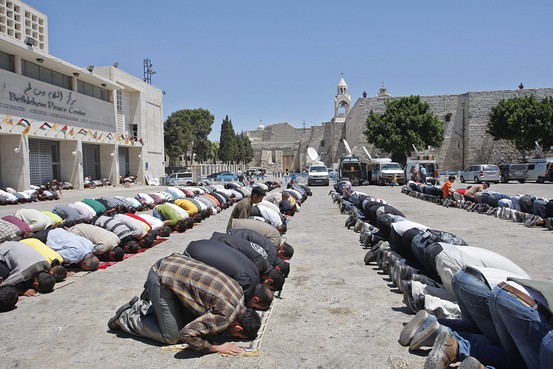 Samir Qumsiyeh, owner of the private Al-Mahd (Nativity) TV station in Beit-Shahur, warned that, "15 years from now there will be no Christians left in Bethlehem. Then you will need a torch to find a Christian here."[4] Population increases in the West Bank have been generally flat. In 1967 there were 40,000 Christians in the area; in 2006 there were approximately 45,800.[5]

The cause for the concern is the Islamic success at the municipal elections, [6] and the Muslim campaign of "intimidation" to force Christians to leave their homes and relinquish their land. After the Palestinian Authority (PA) took control of Bethlehem in 1994, they altered the municipal boundaries of the city and the predominately Christian suburbs of Beit Jallah and Beit Sahour to incorporate the 30,000 Muslims residing in the nearby refugee camps of Dehaisheh, El-Ayda and El-Azeh, and thousands of residents living near the Ta'amarah Bedouin tribe. These boundary modifications created sweeping changes in the demographic balance of Bethlehem.[7]

At the same time, Muslims were persuaded to move from nearby Hebron to Bethlehem where large-scale Muslim housing was being planned. In 1990, Christians comprised 60 percent of the population of Bethlehem.

By 2001 they were 20 percent of the population, resulting in a significant effect on local elections. As a result, PA chairman Yasser Arafat appointed a Muslim as Governor for the Bethlehem District, and the bureaucratic, security and political apparatus was purged of Christians.[8]

Muslims boycotted Christian businesses in Bethlehem's Nativity Square forcing many of them out of business. Approximately ten percent remained by paying extortion money to Muslim terrorists. When a Christian owner of a café in Manger Square refused to be extorted, he was charged with collaborating with the Israelis, then later shot in the eye, and eventually had to escape from the country after having lived in Bethlehem for 30 years. Refusal to pay was often fatal. Furthermore, at the PA-controlled Voice of Palestine, Christian names are not permitted to be mentioned in the obituaries read on air. [9]

Those who sell land to Jews are subject to the death penalty according to the Palestinian Land Law, a clear violation of two international rulings. Article 17 of the Universal Declaration of Human Rights (adopted by the UN General Assembly on December 10, 1948), states that everyone has the right to own property. Part III, Article 6 of the International Covenant on Civil And Political Rights states, "In countries which have not abolished the death penalty, sentences of death may be imposed for only the most serious of crimes. This penalty can only be carried out pursuant to a final judgment rendered by a competent court."[10]

In this environment of "officially sanctioned intimidation," Christians have considerable trouble buying land or selling their own property to other Christians. There is even the perception that selling to any non-Muslim is prohibited. The PA does not recognize Christian property rights as sacrosanct, including holy sites on the West Bank. As early as 1997, the PA Ministry of Information claimed that the Palestinian people "have assumed their natural right to of controlling parts of the Palestinian land, the most important of which under Palestinian national sovereignty is in the Palestinian city of the birthplace of Jesus Christ---Bethlehem."[11]

Palestinian protection means little when Christian cemeteries and symbols are desecrated, property wrecked, monasteries robbed of gold and precious objects, and parishioners hindered from attending services. An atmosphere of intimidation and trepidation is created, especially since the perpetrators can buy their way out from serving time.[12]

Of all the abuses Christians are forced to endure, the treatment of their women is the most egregious. They are subjected to verbal sexual harassment and rape "perhaps the most blatant denial of basic human rights of religious identity." Compounding the problem is that in the Middle East, a female who has been violated is regarded as having been sullied and "unfit for marriage." Rather than bring shame to the victim, the rape is not openly acknowledged. Furthermore the victim must prove she has been raped. If not, a court can convict her of having had extra-marital relations.[13]

Raping a Christian woman often has fewer consequences than raping a Muslim one. The rapist knows that under a Muslim- controlled PA there is a greater chance of not being prosecuted. If the victim is Muslim, the perpetrator has to contend with members of her extended family, [14] who are obligated to obtain compensation or revenge. Each member is responsible for the welfare of individuals in the group. When one member is attacked, the group unites to protect themselves. They do not expect government agencies, officials, police, courts or any other institutions or persons to intervene on their behalf. [15]

Those willing to speak out openly about this bullying are subjected to death threats. Samir Qumsiyeh documented 160 attacks against Christians, including physical harassment, home robberies, and illegal seizure of land during the past several years. In response to Qumsiyeh's own public statements, his home was fire-bombed.[17]

The 3,000 Christians living in Gaza among 1.2 million Muslims are also anxious and quite concerned about their future. Archimandrite Artemios, the Greek Orthodox priest who heads the St. Porphyrius church in Gaza, observed that Christians never felt so "endangered" as they do now. He did not know whether they were even still considered "part" of the Gaza community.[18]

A rash of attacks has raised the level of their apprehension. On February 15, 2008, a library managed by the Young Men's Christian Association was firebombed, resulting in the destruction of 10,000 books. The previous Fall a Christian book store owner was kidnapped and murdered. His shop was bombed twice. A Catholic church and a school were vandalized in August 2007. These incidents lead Artemios to conclude, "the edifice of tolerance is crashing down over our heads."[19] Before dawn on May 16, 2008 a bomb exploded outside the Zahwa Rosary School, a Christian school in Gaza city, operated by nuns primarily for Muslim students.[20]

Writing in the London daily Al-Sharq Al-Awsat, Hussein Shubakshi, a Saudi columnist complains about Christian emigration from the West Bank, Gaza, Jordan, Egypt, Lebanon, Iraq, Egypt, Sudan and Syria which "has reached astonishing proportions." In Gaza and the West Bank, there is "a plan to eradicate the entire deeply-rooted Christian presence from its territories." There are 70,000 Palestinian Christian émigrés living in Chile, particularly in Santiago, the capital. Arabs from other areas emigrate to Europe, Australia, the U.S. and Canada.

That they are "openly and collectively" leaving by the thousands from Arab countries out of "fear, worry" and "society's failures," should be of grave concern, Shubakshi asserts. Failure to address the spread of extremism will be at a high price to all concerned.[21]

What is particularly discouraging is that many church leaders throughout the world are aware of the myriad human rights abuses perpetrated by the PA against the Christian Arabs according to Justus Reid Weiner.[22]

Yet despite the beatings, theft of land, kidnappings, torture, firebombing of churches, forced marriages, rape, extortion, and sexual harassment, these church leaders "remain silent." Others, "rather than identify the true Palestinian perpetrators of crimes against their people, take the politically correct path" by accusing Israel of being responsible for the strife and misery in the area. They do not even concede or criticize Muslim aggression. Church leaders often blame Israel for the decline of the Arab Christian population in Judea, Samaria and Gaza and for the suffering they experience under Hamas and Fatah rule.[23]

The Western Christian leaders involved in this anti-Israel activity are from the American Episcopalian and Presbyterian movements.[24] Those taking comfort in evangelical backing for the Jewish state should think again. Jim Fletcher, publisher of the pro-Israel Balfour Books and an evangelical Christian, observes that there is an increasing erosion of evangelical support for Israel that is being influenced in part by the constant attacks against Israel in the Western media.[25] Until there is a concerted effort to counter the lies and distortions within the Christian community, this erosion will continue.

22. Gerstenfeld, "Palestinian Crimes against Christian Arabs and Their Manipulation against Israel: Interview with Justus Reid Weiner," op.cit.; For persecution of Christians in other Muslim countries, please see Paul Marshall and Lela Gilbert, Their Blood Cries Out (Nashville, Tennessee: Thomas Nelson, 1997); Nina Shea, In the Lion's Den: A Shocking Account of Persecuted and Martyrdom of Christians Today and How We Should Respond (Nashville, Tennessee: Broadman & Holman, 2007).

25. Jim Fletcher email to author December 8, 2009. For examples of how some evangelicals view Israel, please see Brian McLaren a Christian "activist" and author, is part of the so-called Emergency Community, liberal Christians who count activism for the Palestinians as one of their callings. www.brianclaren.net. His blogs often discuss "justice for the Palestinians; Christianity Today, the flagship magazine of American evangelicals. The CT staff contains many anti-Israel Christians.
http://blog.christianitytoday.com.ctliveblog/archive; Janet Parshall, www.christianpost.com/article/20070331/prominent-evangelical-leader- opposes-blind-support-forIsrael/archives/oldindex.html; General Council of the Assemblies of God, www.ag.org/top/beliefs/sptlissues Israel.cfm; Friends of Sabeel-North America (FOSNA) works in the United States and Canada to support the vision of Jerusalem-based Sabeel, a Christian liberation-theology organization. FOSNA cultivates the support of American churches through cosponsored regional educational conferences, alternative pilgrimage, witness trips, and international gatherings in the Holy Land (www.fosna.org); 2007 letter to President George Bush, from prominent evangelicals who support a two-state solution: www.christianpost.com/20070731/ u-s-evangelicals-shatter-christian-zionist-misconception/archives/oldindex.html

Dr. Grobman is a Hebrew University trained historian. His is the author of a number of books, including Nations United: How The U.N. Undermines Israel and The West; Denying History: Who Says The Holocaust Never Happened and Why Do They Say It? and a forthcoming book The Palestinian Right To Israel about Israel's moral and legal right to exist as a Jewish State to be published by Balfour Books.