"Nakba" is in the air. An Arabic word meaning "disaster," it's become a tag — among Israeli Arabs, Palestinians in the West Bank and Gaza, and Arabs outside of Israel — for Israel's creation on May 15, 1948. On Sunday "Nakba Day" was marked[1] for the first time by the attempted breach by Arab civilians of Israel's Golan (successfully), Galilee, and Gaza (unsuccessfully) borders, as well as a terror attack[2] by a lone Israeli Arab civilian in Tel Aviv.

Israelis are getting the message. "Nakba" refers to Israel's creation, its existence, not to its conquest of additional territories in 1967. The only "solution" to this "disaster" is Israel's destruction, not its return to the 1967 borders as believed by the votaries of "peace process" and "two-state solution."

Lest there be any doubt, as part of Sunday's festivities Hamas Prime Minister Ismail Haniyeh advised[3] Palestinians to "pray for an end to Israel," saying: "Palestinians mark the Nakba with great hope of bringing to an end the Zionist project in Palestine." Since Hamas is by and large regarded as a bad guy, that may not have seemed so notable.

But Haniyeh's partner in newly declared Fatah-Hamas unity[4], West Bank Fatah leader and alleged moderate Mahmoud Abbas, wasn't much better. A day earlier he said[5] Palestinians would never give up the "right of return," and that every Palestinian "has the right to see Palestine and return to the homeland because the homeland is our final destination" — a slightly oblique way of saying the same thing Haniyeh said, since the "return" of millions of descendants of refugees living in Lebanon, Syria, Jordan, the West Bank, and Gaza would spell Israel's demographic demise.

Even so, veteran left-of-center commentator Nahum Barnea, known as the dean of Israeli columnists, tried[6] to deny and deflect the clear import of Abbas's words. Writing in Israel's largest daily Yediot Aharonot, he claimed that Abbas,

like every politician...is attentive to his constituency's mood. At times, the words that come out of his mouth are stronger than him; he gets carried away.

On the eve of Nakba Day he promised his people that no Palestinian leader will renounce the right of return... Abbas refrained from clarifying the question of how and where this right will be realized, whether through monetary compensation or physical return, whether in the future Palestinian state or in Israel too; anyone could make what he wanted out of the Palestinian leader's words.

Not really; "return to the homeland because the homeland is our final destination" does not mean "monetary compensation," and thanks to comprehensive indoctrination, what "homeland" evokes for every last Palestinian Arab is pre-1967 Israel.

An article by another Israeli journalist, Khaled Abu Toameh, makes the reality clearer yet. As he reported[7] on Nakba Day from Ramallah on the West Bank:

Thousands of Palestinians took to the streets...to participate in a rally...

The demonstrators made an oath to continue the struggle to ensure the return of the refugees to their homes and vowed to make sacrifices to achieve their goal.

The demonstrators chanted slogans calling for the "right of return" for all Palestinian refugees to their original homes inside Israel. They also unfurled black flags carrying the words, "There is no alternative to the right of return."

The article includes this photo of quite-young Palestinian boys taking part in the rally. 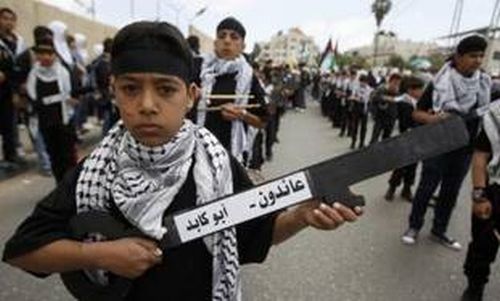 They're carrying symbolic keys — keys to "homes" within pre-1967 Israel. Such keys are used systematically,[8] by both Fatah in the West Bank and Hamas in Gaza, to inculcate the idea that Israel itself is the "destination."

Fortunately, though, there is a side to Nahum Barnea and Israelis like him that is still connected to reality. As he also wrote in his Nakba Day column:

The truth about the right of return should be told not only to the Palestinians, but to the Israelis as well. Revoking the possibility of returning to Israel is the red line that Israelis who endorse the two-state solution won't cross....

...those who wish to live in the sovereign, Zionist and democratic State of Israel have no other option but to keep telling our cousins: With all due respect, what's in the past is in the past. We are destined to share: We shall return our settlers to our country; you will absorb your refugees in your country. You will not be returning to Israel.

In other words: "But if you're really serious about that 'right of return' stuff, I will unite with my right-wing brethren — 'settlers' and all — in resisting it." "Nakba," then, concentrates Israeli minds wonderfully. The moderate left — journalists like Barnea, politicians like opposition leader Tzipi Livni — will continue to speak nonsense, sometimes harmful nonsense, out of one side of their mouth. But Israel as a whole senses the threat and is already coalescing. As Prime Minister Binyamin Netanyahu told the Knesset[9] on Monday, "We must stop beating ourselves up and blaming ourselves.... This is not a conflict about 1967, this is a conflict about 1948, about the state of Israel's very existence."

P. David Hornik is a freelance writer and translator living in Beersheva. He blogs at http://pdavidhornik.typepad.com/ This article was published May 16, 2011 on PajamasMedia
http://pajamasmedia.com/blog/nakba-concentrates-israeli-minds/2/