SLAVERY IN ISLAM
by Amil Imani 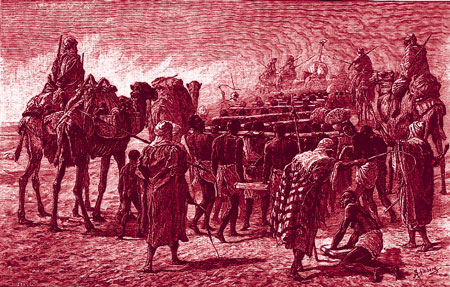 Slavery, making one human the property of another, was widely practiced in the past by many societies. Regrettably, even in the 21st Century, the horrid practice continues in certain areas, most notably among Muslims. Islam's genesis was the Arabian peninsula of the seventh century AD, known for its primitive beliefs and savage practices. So, it is of no surprise that Islam incorporated slavery and much of the ethos of the culture of its birthplace.

Is discussing slavery beating a dead horse? Regrettably, it is not. The Anti-Slavery Society has documented numerous contemporary instances, most of them from Islamic countries. The repugnant practice of slavery presents a real threat to human dignity as Islamic fundamentalism is surging. The Islamic law — the Shariah — is based on the provisions of the Quran.

And the Quran explicitly and implicitly condones slavery in dozens of suras (chapters). Muhammad himself took numerous slaves, mostly women, as spoils of war. Some of the women Muhammad took for himself he called concubines, hardly a consolation to the helpless enslaved women.

Documents show that in the heyday of slavery, Muslims took just as many slaves from East Africa as did the Christians from West Africa.

Slavery is a matter of degrees. On one extreme is the absolute right of the owner to do whatever he wishes to the slave. This form of slavery is no longer prevalent. Yet disenfranchising people from any provisions of the Charter of Human Rights constitutes a form of enslavement. 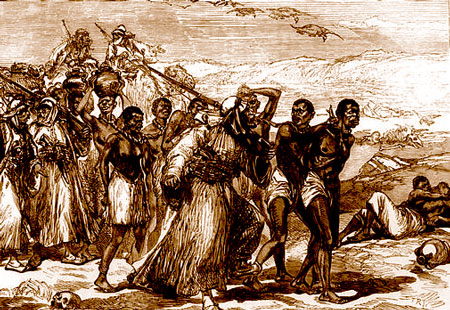 Slavery seamlessly became a part of Islam, since it was widely practiced by the Arabs. Slavery is repeatedly approved in the Quran. The Old Testament also sanctioned slavery. Yet, Jewish and Christian societies have long banned slavery while the Muslims consider every verse and word of the Quran as those of Allah that can never be revised, discarded or violated. Therefore, with the resurgence of Islam, more and more Islamic laws and ethos, including slavery of various types and degrees, are implemented. One clear validation of the practice of slavery is the sura below:

[Q 16.75] Allah sets forth a parable: (consider) a slave, the property of another, (who) has no power over anything, and one whom We have granted from ourselves a goodly sustenance so he spends from it secretly and openly; are the two alike? (All) praise is due to Allah!

Slavery, discrimination, exclusivity and many more unjust provisions are systemic to Islam without any possibility for reformation. Muslims revere the Quran as the eternal immutable words of Allah. They accept the Hadith, Muhammad's sayings, as further elucidation of their faith and emulate the Sunna the way Muhammad, the perfect practitioner of Allah's teachings, conducted his life.

Muslims believe that Allah himself is the author of the Quran, that he wrote each chapter himself and had the angel Gabriel deliver it to Muhammad, who was illiterate. Muhammad must have been endowed with perfect memory in order to transmit each verse of the Quran exactly as written by Allah. What Muhammad revealed bit-by-bit over twenty years, not a voluminous work by any measure, was recorded by various people on all manner of bones, parchments, and bark. At least four major versions of the Quran eventually emerged. So, Allah's words were revealed by a perfect unerring messenger and were recorded by a number of imperfect humans in different versions. It remained for other imperfect humans, the Caliphs, to choose the one version they believed to be the literal perfect words of Allah and ordered the rest destroyed.


BASED ON THE QURAN ITSELF, a number of Islamic precepts and practices clearly violate the provisions of human rights, institutionalize discrimination, and constrain liberty. A partial list of these violations is supplied below:

To better understand Islam, a brief reference to its birth may be helpful. The founder of Islam, Muhammad, worked for and married a wealthy woman many years his senior named Khadija. One day, alone in a secluded place, Muhammad had a revelation and reported the experience to Khadija. Khadija assured him that he had been chosen by Allah as his messenger. From that point on, Muhammad proceeded to reveal the Quran and the carved-in-granite Islam and its dogma was born.

Presently, with each passing day Islam is making inroads into both the traditionally Muslim lands as well as much of the non-Muslim world where Islam is beginning to run deep roots and vie with the laws and cultures of its hosts. Muslims are taking advantage of the freedom that democracies grant. They use the same provisions of the law that are intended to protect and enhance liberty to subvert democracy and freedom.

Islam is indeed a dangerous comprehensive form of slavery. Its very name, Islam, means submission or surrender. True to its name, Islam strives for nothing short of enslavement of the body of humanity as well as the bondage of its mind.

Complacency and appeasement on the part of free people can only serve Islam. There is no chance for co-existence with Islam. All one needs to know is to see what is happening in Islamic countries. That is exactly what is in store for the presently free people of the world if Islam is not held in check.

There is a hope that Muslims themselves may leave this Bedouin slaveholder religion. Yet, the hope is slim. Islam has a stranglehold on its slaves and will neither let them go, nor do the Muslims seem to have the insight or the will to leave it in large numbers. But hope, as slim as it is, keeps me sounding the alarm before the fire of Islam engulfs us all.

Warning to free people: Don't bank on the politicians, the master practitioners of the art of the politically correct, to protect liberty. Politicians must be urged by the citizens to safeguard liberty, scrutinized closely that they do the work, and be held accountable if they fail to do so. You, a citizen, also have a job to do. Take a few minutes a day and do what you can to protect freedom. "Freedom is not free," may be a cliché. Yet, it is the most profound four-word sentence in the lexicon of the free.

Amil Imani is an Iranian-born American citizen and a pro-democracy activist residing in the United States of America. Imani is a columnist, literary translator, novelist and essayist who has been writing and speaking out for the struggling people of his native land, Iran. He maintains a website at www.amilimani.com. He is the author of Obama Meets Ahmadinejad. This article is archived at
http://www.familysecuritymatters.org/publications/id.9089/pub_detail.asp