WILL IRAN'S MULLAHS USE THE BOMB?
by Amil Imani 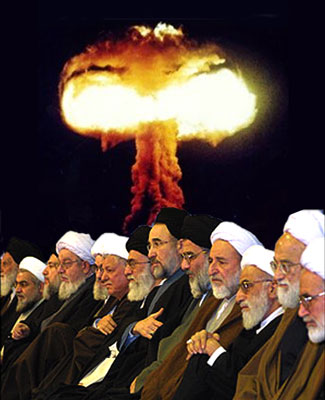 There is so much smoke around the Iranian Mullahs' bomb that makes Tehran's smog feel like a fresh ocean breeze, by comparison. Here is a partial list of views about the Mullahs, their capabilities and intentions about the bomb affair.

Psychological denial is a common quirk of the human mind. People use denial to distort, even refute reality, when accepting it is too threatening to them. Alcoholics are habitual users of denial, a major tranquilizer of the mind. The alcoholic will adamantly deny having any problem with alcohol and continues to drink, even in the face of irrefutable contrary evidence. Denial is resorted to by both individuals and groups, and can be just as deadly for both.

Perhaps the most compelling dismissive argument is that the Mullahs would never dare to use the bomb, since it would be suicidal to do so.

This argument is just as flawed as the rest. The "mutual deterrence" argument may work in state-to-state confrontations. It apparently has worked in the past and the hope is that it will work in the future. However, the mutual deterrence argument fails when a non-state entity is the adversary. The Mullahs don't have to lob a bomb at Israel or at anyone else to inflict huge harm. They can pursue their cause of death and destruction by simply providing their killers with dirty bombs in a suitcase. Given the Mullahs' fanaticism and Machiavellian nature, they would come up with a myriad of clever schemes to achieve their objectives.

Consider dirty bombs. They are easy to make, are portable, can kill as well as make a city uninhabitable, without leaving a "finger print." The Mullahs can go to work then turn "innocently" to the international community for help-to find a group of rogue radicals, so they claim, who had penetrated their facilities and have made off with a loot of radioactive stuff.

It is not as if events like this have never happened in the past. Deadly stolen radioactive materials have found their way to the black market on a number of occasions. The world would respond in panic, yet with its usual arthritic sluggishness searching for the miscreants. Given how clumsy and disorganized the world's intelligence community is, the prospect of acting expeditiously, much less apprehending the "thieves" is not very encouraging. This is particularly the case when the Mullahs themselves would have a short leash on the "thieves," to hide them and deploy them only with the greatest of care.

Iran's ruling Mullahs are clustered around major factions such as the conservatives, the moderates, and the so-called reformists. Yet, the differences among these factions are tactical rather than strategic. One and all share the same overarching goal of defeating the "Crusader-Zionists" by any and all methods possible; bringing about the "end of the world" Armageddon; and, thereby creating the requisite conditions for the appearance of the Hidden Imam, the Mahdi, to assume his rule of the world.

Therefore, it is "Carteresque" (foolish risk-taking a la Jimmy Carter's throwing the nation's lot with the Mullahs during the 1979 Iranian Revolution) to overlook the fact that it is Islam, irrespective of any and all considerations, that poses a deadly threat to the world. Choosing one faction over another is no choice at all.

What is the likelihood that the ruling Mullahs will actually use the bomb? If they remain in power long enough to have it, they are very likely to use it, in one form or another. At the very least, they use the bomb for blackmail and intimidation in the region. Not even the all-out nuclear exchange can be ruled out. Islam is a religion centered on death with the faithful eyes fixed on the afterlife and its promised eternal pleasures. If the faithful kills, he goes to Allah's paradise; if he gets killed, he goes to Allah's paradise.

The Mullahs' claim that they are pursuing the nuclear program to meet the country's energy needs could only fool the most gullible-denial type. Why is it that the Mullahs invest nothing at all in stopping the leak of more than six percent of the precious oil they pump out? For every 100 barrels, six barrels of Iran's irreplaceable national treasure dissipates at the wellhead. Yet, they spend billions of dollars to harness nuclear energy. Just as troubling is the fact that Iran sits on one of the world's most dangerous earthquake fault lines. Building nuclear plants on sites such as the one in Bushehr is absolute insanity.

Speaking of insanity, Ahmadinejad, the Monkey, comes to mind. He is dismissed as being a zany fanatic who shouldn't be taken seriously for his bomb-rattling threats. But this type of dismissiveness can prove deadly. Recall that even a multi-billionaire former president of Iran Rafsanjani, a man seen by many as moderate and a shrewd live-let-live type, has publicly announced that a single bomb would finish off Israel while the Muslims would suffer a setback from which it can easily recover.

The Mullahs are proven vicious mass killers. They summarily executed tens of thousands of Iranian dissidents. They had no qualms at sending thousands of children to clear the minefields ahead of their tanks during the 80-89 war with Iraq; and, they have thousands of "martyrs" brainwashed and prepared to serve as bomb mules to be dispatched to any place in the world.

Sadly, once again it is the peak of "Me First" time with American politicians. Time and again we are told by the politically correct "experts" not to worry about Islam posing a threat to our way of life. We are repeatedly lectured that only a very small minority of Muslims are troublemakers who are giving the peaceful masses of Muslims a bad name. We are also informed that the terrorists, who happened to be Muslims, are the disaffected and the young. And not to worry, since as the fire of youth turns to ashes of old age the rebellious will mellow, as they always have.

In the meantime the real enemy, Islamofascism is forging ahead toward its goal of dominating the world.

I have been warning that it is a deadly miscalculation to engage in infighting, and sit and wait this emerging catastrophe out. It is little more than an exercise in denial to believe that nothing bad will happen, and that the corrupt inept Mullahs will likely shoot themselves in the foot instead of wreaking havoc on the world. I also keep pleading that we should forthwith help the Iranian democratic opposition and send the death-bearer Mullahs back to their mosques. It is the free world's best and urgent option.

What sane person would want to take a chance to wait and see if the mad Mullahs, once they have the bomb, would use it or not?

Amil Imani is an Iranian-born American citizen and a pro-democracy activist residing in the United States of America. Imani is a columnist, literary translator, novelist and essayist who has been writing and speaking out for the struggling people of his native land, Iran. He maintains a website at www.amilimani.com. Amil Imani is the author of the smashing book Obama Meets Ahmadinejad. This was submitted June 3, 2011. It is archived at
http://www.familysecuritymatters.org/publications /pub_detail.asp?id=9664