HOW RACHEL CORRIE REALLY DIED (HINT: NOT PROTECTING A HOUSE)
by Carl of Jerusalem

On March 16, 2003, ISM 'activist' Rachel Corrie was killed by an Israeli D9 bulldozer[1] in Rafah in the Gaza Strip. Rafah is in the Philadelphi Corridor in the map at left, along the border between Gaza and Egypt.[2] You may recall that it's where the border between Gaza and Egypt was breached just a few weeks ago. At the time, the ISM claimed that Corrie was protecting a 'Palestinian' house.

"Witnesses said Rachel Corrie, 23, from Olympia, Washington, was trying to stop the bulldozer from tearing down a building in the Rafah refugee camp when she was run over. She was taken to Najar hospital in Rafah, where she died, said Dr. Ali Moussa, a hospital administrator.

"Corrie was a member of the International Solidarity Movement. Joseph Smith, 21, of Kansas City Missouri, who was with Corrie at the site, said the driver of the bulldozer, an IDF soldier, could clearly see Corrie as she sat in front of the machine.

"Contrary to Smith's report, IDF Capt. Jacob Dallal of the IDF Spokeswoman's Office said Corrie's death was an accident. The US State Department had no immediate comment.

In a series of three videos, each running approximately nine minutes, Becky Johnson and Lee Kaplan debunk the myth that Corrie was protecting a house. In fact, as Smooth Stone[3] points out and as you will see in the video below, Corrie was standing in a trench where she could not be seen, protecting an entrance to a weapons tunnel.

Actual video footage from the Israeli Defense Forces show the real circumstances under which the terrorist-loving anarchist died: knee-deep in a trench in the middle of dirt in an open dirt field. The left arrow on the photo below points to the tractor, the right arrow shows the kneeling Rachel Corrie. To see the live action footage moments before Rachel Corrie's accidental death, go to the Part 2 video 49 seconds into the video: 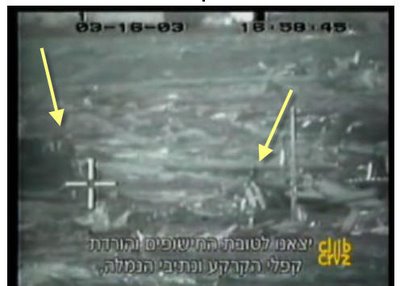 To see the live action footage moments before Rachel Corrie's accidental death, go to the Part 2 video, 49 seconds into the video:
here.

I actually watched all three parts of this video and for those of you who are inclined to do so, it is well worth the time. But what I noticed was that Video # 1 had the most views, Video # 2 had 40% less and Video # 3 had 50% less than that. Video # 2 is -- in my humble opinion -- the most significant video.

I also urge you to go to Smooth Stone's site,[4] because he shows how the ISM used fauxtography to create the image of Corrie standing in front of a house rather than being in the trench where she really was.

For those of you who watch it, you will note that at the end of Video # 3, Lee Kaplan states his belief that the 'Palestinian' doctors who treated Corrie allowed her to die so that the 'Palestinians' would have their 'international' 'martyr.' At the time, Charles Johnson [of the Little Green Footballs blogsite] wrote the following[5] underneath a picture of 'Palestinians' carrying out a mock funeral for Corrie:

Let's see how many different versions of this story we can identify; she was crushed to death protecting a house; she was run over twice; she was crushed under a falling wall while trying to prevent a bulldozer from uprooting shrubbery; etc. etc. etc. Pitiful. And just look at all the Western media, falling for this garbage.

Five years ago, I'm not sure even Charles realized how the ISM had doctored the photographs. It's a pity that the IDF waited this long to release the video.

Carl of Jerusalem is a lawyer who made aliyah in 1991 and is living in Jerusalem. Contact him at IsraelMatzav@gmail.com

[Editor's note:
For a summary written at the time of her death read this.

The statements by the 4 "eye witnesses" -- Tom Dale, Greg Schnabel, Richard Purssell, and Joe Smith -- all members of ISM is to be found at www.electronicintifada.net/v2/article1263.shtml They sound fine and they're very wholesome-looking. Even at the time there were some odd discrepancies in their statements, which one could attribute to the stress they'd been under. I never guessed how inventive they were.

www.indybay.org/newsitems/2003/03/17/15838231.php has some pictures of Rachel taken presumably just before her death. The third one down shows her with a man next to her. He must have been dubbed in at some point -- he is without feet. The seventh one down shows her with a bleeding mouth and her companions gracefully kneeling around her. I see no stress. If I remember this picture correctly, it has been cropped; at the time of her death, her cell phone was lying a few feet away, in uncrushed condition. Speaking of uncrushed, readers of Little Green Footballs commented at the time that if the bulldozer had run over her -- twice, according her buddies -- she'd be flatter than a pancake instead of being 3-D as she obviously is.

"Rachel Corrie - Peace Activist or Palestinian Tool?" at
http://www.geocities.com/rachav/Rachel_Corrie_Propaganda.html pays attention to some major problems with the pictures. The article also has pictures of her in the Arab hospital. They appear to be cleaning her up. The pose is as if they are operating -- without face masks, but there seems to be some IV tubing around her, so presumably she's still alive, Yet the caption says she died before she got to the hospital. So did she survive the ambulance and die in the hospital? Or was she snuffed out in the ambulance?]