THE AL-KUWAITY BROTHERS ARE BACK!
by Lyn Julius 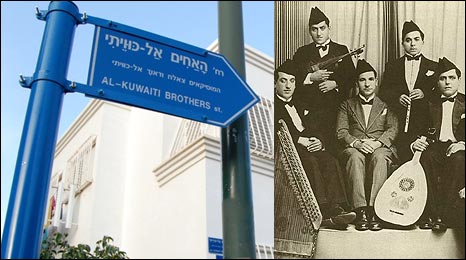 Imagine a duo as famous as Simon and Garfunkel suddenly falling out of favour in the US. Their songs might still be played on the radio, but the DJs would not say whom they were by. Other musicians would appropriate their songs as their own. The younger generation would hum the familiar tunes without knowing who had composed them. Their names would gradually fade from memory.

This is just what happened to Saleh and Daoud al-Kuwaity, one of the most celebrated 20th-century musical duos of the Arab world. In their heyday, they played for dignitaries and royalty; they were so popular that the great Um Kalthoum herself, the Egyptian diva who never sang anything that was not written for her personally, broke her golden rule and performed one of the al-Kuwaitys' most famous hits, 'Your heart is hard as rock'.

But the al-Kuwaity brothers were Jews. They were promptly erased from the Arab world's collective memory after they fled to Israel in 1950-51, along with the vast majority of Iraq's 150,000 Jews. This year, however, the centenary of Saleh al-Kuwaity's birth (1908-1986) has provided an opportunity to salvage their names from oblivion. The year began with an extraordinary concert at the London Middle East Institute (SOAS) featuring a group of non-Jewish musicians. The oudh master Ahmed Mukhtar spoke for many Arab intellectuals and performers when he paid tribute to the genius of Saleh al-Kuwaity. The year will end on November 29 with another celebration in London.

Born to a family of Iraqi Jews living in Kuwait, the brothers were introduced to music when an uncle returned from a trip to India with an oudh for Saleh and a violin for Daoud. In Kuwait, the boys were child prodigies. Blending the traditional maqam style with European influences, they soon attracted a huge following. They took the name al-Kuwaity in honour of their biggest fan, the Emir of Kuwait, for whom they would give private performances. In the late 1920s, they moved to Basra in Iraq to play with the legendary singer Muhammad Al-Qubbanji, later becoming a fixture of the Baghdad cabaret scene and accompanying the famous Jewish singer Salima Murad. In the 1930s, they became firm favourites of King Ghazi of Iraq, performing at the funeral of his father King Faisal and at Ghazi's coronation.

The Jews of Iraq played a disproportionate role in music. When a puritanical 19th-century Ottoman wali prohibited Muslims from playing music, the Jews stepped willingly into the breach. Although there were Muslim and Christian practitioners of music and singers of all faiths, the Jewish community ensured high standards of musical instruction. In particular, it set up a special school for the blind, preferring to teach them an instrument rather than see them beg on the streets.

Of all the instrumentalists in 1930s Iraq, 250 were Jews and only three were Muslims. In 1936 the al-Kuwaity brothers were asked to found an orchestra for the new Iraqi Broadcasting Service. On Yom Kippur in 1945, the Iraqi prime minister Nuri al-Said, himself a keen amateur musician, was furious when he switched on the radio and heard silence. When he was told that the Jews did not work on that day, he resolved to found a non-Jewish orchestra.

By then, the Jewish community's days were numbered as a result of Nazi-inspired anti-Semitism, pan-Arab nationalism and the backlash of the Arab-Israeli conflict. As all their relatives and friends were being airlifted to Israel in 1950 with Operation Ezra and Nehemiah, Salah and Daoud al-Kuwaity were faced with a dilemma. Should they exchange fame and fortune for obscurity in Israel? Salima Murad was not prepared to make that choice. 'Who will I sing to in Israel?' she told Saleh. 'My life is singing and in Iraq people know me. No one knows me in Israel.'

The al-Kuwaity brothers were not allowed to take their music scores on board the plane bound for Israel. Then, at Baghdad airport, the strangest thing happened: the Kuwaiti ambassador's limousine drew up to block the departing plane's path. The Kuwaiti ruler had sent his emissaries to make one last-ditch plea for the brothers to stay behind. But their minds were made up.

With almost the entire Jewish community gone, Iraq realised that the country's music tradition would disappear, too. They detained two Jewish families, the Pataws and the Bassuns. Only when they had taught two Muslims to play the santur and the joza were the families allowed to leave for Israel. Even so, Iraq did not have enough musicians at first, and had to borrow instrumentalists from other Arab countries or use graduates of its School of Fine Arts.

The moment they came to Israel, the al-Kuwaitys' career took a nosedive — from royal palaces to a hardware store in the Hatikvah market, a run-down district of Tel Aviv, playing weddings and bar mitzvahs. The embittered Saleh forbade his children from learning music. But there were artistes worse off: Zohara, who sang for the Moroccan king, was reduced to shuffling about in a dressing gown in her one-room apartment in Ashkelon.

Israel eventually did find a weekly slot for the brothers in its Arabic radio broadcasts, but they were reduced to catering for a niche market of a few hundred thousand in Israel, when they had had seven million listeners in Iraq. To be confined to an oriental music ghetto must have been painful. But it was not half as painful as the brothers hearing their music played on the radio stations of the Arab world attributed to Muslim musicians, or labelled 'of folk origin'.

They had become non-persons. The erasure of their identity fitted neatly with the propaganda narrative of denial that held that the Jews had never lived, or were intruders, in the Middle East. The brothers' names were declared taboo by a special committee set up by Saddam Hussein to sift out cultural 'impurities'.

With all due respect to Daniel Barenboim and his Divan orchestra, the rehabilitation of these masters of Arabic music may do far more to break down barriers between Arabs and Jews than the rarefied sounds of an alien culture. The al-Kuwaitys' music represents a shared heritage. It speaks to Arab hearts in a way that Beethoven never will.

For the Arab world to give the al-Kuwaitys the recognition they deserve is a small step towards accepting that Middle Eastern Jews, now largely transplanted to Israel, were an organic part of the region for thousands of years. Jewish musicians and singers, actors and authors, made an immeasurable contribution to modern Arabic culture, not just in Iraq, Kuwait and North Africa, but also in Egypt.

The founder of Egypt's first national theatre in Cairo in 1870 was an Egyptian Jew, dubbed the country's Molière; the first Egyptian opera in 1919 was written by a Jew; Jews wrote dozens of films that are considered classics of Egyptian cinema. Jewish performers treaded the boardwalks in Cairo. Crowds flocked to see the Egyptian-Jewish singer and actress Leyla Mourad.

Only with the demise of Saddam's regime has the towering contribution of the al-Kuwaity duo begun to be acknowledged. A few years ago, Shlomo, Saleh's son, released a compilation of the al-Kuwaiti brothers' songs in Israel, which was also sold online.

'Suddenly we started to get e-mails from Iraq, from Kuwait, from Iraqis in Europe,' he says. 'They were writing to say my father was the best and that they've admired his songs for so long.' With help from fans and musicians, Shlomo has recovered some 700 of his father's compositions.

In Israel, the al-Kuwaitys' music — on the soundtrack for the film Turn Left at the End of the World — is being rediscovered by their grandchildren's generation. Earlier this year, a street in Tel Aviv was named after the brothers.

The Arab world needs to acknowledge its debt and to accept that uprooting their Jews exacted a heavy price. The day that a street in Baghdad is named after the al-Kuwaity brothers would be a day for celebration, indeed. Therein lies the path to reconciliation.

The story of the al-Kuwaity brothers, a Harif/Spiro Ark celebration on the centenary of the birth of Saleh al-Kuwaity, with Yeheskel Kojaman, Sara Manasseh and Ehsan Aleman (oud), was held on Sunday, November 29, 2009. For CDs and DVDs, visit: http://www.alkuwaityevent.com/ak/i/i51.html

Lyn Julius is a journalist and co-founder of Harif (www.harif.org), a UK association of Jews from the Middle East and N. Africa

This article was published in The Middle East in London in September, 2009
(http://www.lmei.soas.ac.uk/events/mel.cfm.) The photo is from the September 1, 2009 Point of No Return Column (http://jewishrefugees.blogspot.com/2009/09/al-kuwaity-brothers-are-back.html), where Julius' article was introduced thus:

In just 50 years, almost a million Jews, whose communities stretch back up to 3,000 years, have been 'ethnically cleansed' from Arab countries. These refugees outnumber the Palestinian refugees two to one, but their narrative has all but been ignored. Unlike Palestinian refugees, they fled not war, but systematic persecution. Seen in this light, Israel, which absorbed most of these Jewish refugees, is the legitimate expression of the self-determination of an oppressed indigenous, Middle Eastern people. This website is dedicated to preserving the memory of the near-extinct Jewish communities, which can never return to what they once were. It will attempt to pass on the stories of the Jewish refugees and their current struggle for recognition and restitution. Awareness of the injustice done to these Jews can only advance the cause of peace and reconciliation. (Iran: once an ally of Israel, Iran is now an implacable enemy and numbers of Iranian Jews have fallen drastically from 80,000 to 20,000 since the 1979 Islamic revolution. Their plight - and that of all other communities threatened by Islamism - does therefore fall within the scope of this blog.)