THE HASHEMITES IN PALESTINE: A ROYAL SCAM THAT KEEPS ON SCAMMING
by Ruth King 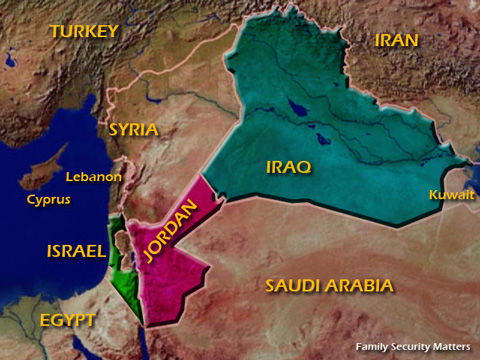 News from the Middle East is full of the threat of Arab revolts "springing" up in Jordan and challenging the rule of King Abdullah II, son of the late King Hussein. The throne in Amman is depicted as the "ancient" Hashemite Dynasty of Jordan. It's a royal historical scam. There has never, repeat never, been an ancient Hashemite legacy in Palestine, unless 1922 is "ancient" history. 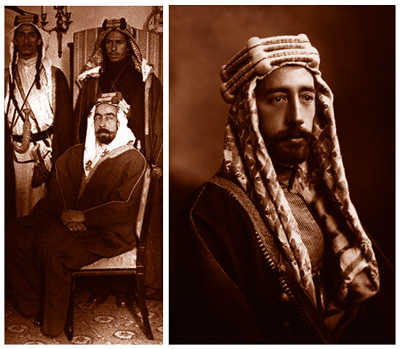 Abdullah I (left), King of Jordan and (right) his brother Feisal 1 of Iraq.

That year the British deeded 82% of Mandated Palestine to the Arabs. King Feisal got Iraq and his kid brother Abdullah Senior (great-grandpa to the present Abdullah) had to be mollified so they gave him Trans Jordan. He was assassinated and his grandson King Hussein, known as "Al-Malik Al-Insan ("The Humane King"), succeeded his father who was Talal the insane, who ruled only for a few months.

Again, check out the family tree which derails the spin of the ancient Hashemite Kingdom of Jordan. Please note that the family tree is detailed in small print in Arabic, but the English translation has been removed. The Hashemite clan ruled over parts of the Hijaz region of Arabia from 967 to 1925 in unbroken succession. Moreover, the late King Hussein's branch of the Hashemite family ruled the holy city of Mecca from 1201 until 1925. When Abdullah (the First) took over Jordan, the local nomadic Arab population was totally indifferent. Calvin Coolidge could have been made king and it would not have created much of a stir.

Abdullah I depicted on a Jordanian postage stamp from 1930.

What is really amazing is the number of Jordanian and Hashemite sites that speak of the Arab "restoration" of Jerusalem. In fact, under Hashemite control east Jerusalem was restored to rubble. Jewish shrines and cemeteries were sacked, torched, and defiled and access to Jews was forbidden and severely restricted for Christians.

But there is no surprise here. The west swallowed the lie whole and the Israelis except for the now somnolent Ariel Sharon did not promote the truth. Some excuse this lapse as a way to accommodate what was the crypto friendship of Israel and the late King Hussein after his humiliating defeat in 1967, but the cover-up of history now comes back to bite them as Arabs and their enablers agitate for independence without recognizing that Jordan is a Palestinian Arab state, occupied and ruled by a Hashemite minority.

Nonetheless, the myth lives and circulates and the royals of Jordan past and present do their best to keep it going. The present King reminds one and all that he is a direct descendant of the prophet Mohammed, but his ascension to the throne was by no means guaranteed. King Hussein had four wives and eleven children.

His first marriage, in 1955 when he was nineteen years old was to Dina bint' Abdul Hamid, a twenty six year old Egyptian third cousin. They divorced in 1957 and a decade later she married Salah Taamari an Egyptian PLO commando.

Second foray down the aisle was to Antoinette Avril Gardiner in 1961. Toni, as she was called was an award-winning field hockey player, former typist, and daughter of a British army officer turned innkeeper. At their wedding and her conversion to Islam she was given the title Princess Muna al-Hussein. They were divorced ten years later after she bore him four children including Abdullah who is the present king. During his marriage to Muna, King Hussein was confronted with a challenge from the PLO in Jordan. In 1970 when the PLO almost consolidated a thuggish rule in Amman, King Hussein killed and expelled thousands in the incident known as "Black September". The terrorists alighted in Lebanon where they ruled until the Lebanon War of 1981 when, in an enforced cease fire by the Reagan administration, several thousand were forcibly repatriated to Jordan.

His third wife is a sad parenthesis. Alia-Baha ad Touqan and King Hussein were married in 1972. They had three children, one adopted. In 1977 she died in a helicopter crash.

Hussein's fourth and most famous wife was American Elizabeth Najeeb Halaby whom he married in 1978. Upon her conversion to Islam she was renamed Queen Noor al Hussein. She and the King had four children and Ma Noor connived mightily to have their son Hamzah ascend to the throne upon Hussein's death. Just before his death, Hussein made a constitutionally allowable change to his will, disinheriting the heir-apparent of several decades, his brother Hassan, in favor of his eldest son Abdullah.

Queen Noor left Jordan after his death in 1999. Elegant, comely, poised and nasty she still insists on being called "Her Majesty" by all and makes many televised appearances. She is now involved in something called "Global Zero" an anti- nuclear arms group. This must have put step-ma Noor in conflict with King Abdullah II who recently announced a desire for Jordan to have nuclear arms since it has no oil.

Noor repeats all the tired old accusations of Israel as aggressor, occupier, and often slams the Zionist lobby. Jordan, however, is always portrayed by her as a tolerant and humane society. And, she does not shrink from criticizing American policy either. On February 8, 2011 she told a gullible and uninformed Piers Morgan: "Most Arabs are moderate peaceful centrists... the Muslim Brotherhood are one of many groups throughout the region that have points of view that need to come to the table." 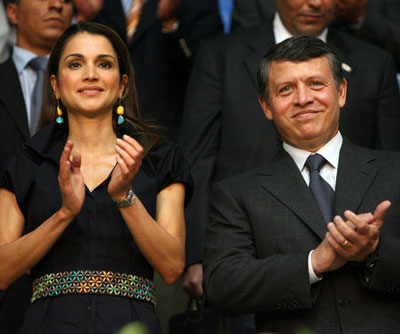 Abdullah II's wife is Queen Rania, pretty and voluble and a fibber. She has described herself as a "Palestinian" refugee from Tulkarm, but the truth did out. She was born in Kuwait to a wealthy doctor of "Palestinian" origins, and she did indeed become a "refugee" when Kuwait expelled 400,000 Palestinian residents following the first Persian Gulf War, as punishment for their support of Saddam Hussein after his invasion of Kuwait.

She too can be quite testy about Israel. Witness this June 2010 fevered outburst about Israel's raid on the flotilla

The attack stunned the world because of its blatant and absurd disregard for anything resembling international law, human rights, and diplomatic norms. Its glaring outrageousness stunned, but didn't surprise, me. It cannot be viewed in isolation. It is another upshot of a dogma long fermenting on Israel's political landscape. It is a doctrine that lives for itself and off others. It survives by tapping into the subliminal and cognisant levels. It implants into public consciousness a set of tenets that see Israeli's very existence as eternally under threat, to be defended through any means (preferably through use of force to show the enemy who's boss)."

King Abdullah II is, like his wife, a favorite of the American media. He is described as a leading "moderate" although he does cozy up to all Arab hardliners in effusive criticism of Israel. His late father was described as "plucky", but this king is just pudgy.

In official photographs Abdullah looks more like a star in a Gilbert and Sullivan operetta with dozens of medals adorning his chest. Since his coronation he has received thousands of medals and honorary titles from all over the world including the Order of the White Eagle of Poland and the Grand Order of Mungunghwa of Korea, and the highly coveted Al Fateh Revolution Medal, a top honor in Libya. The medal was given to the King by the Libyan ambassador to Jordan, Mohammed Hassan Barghathi, in place of Libya's leader, Muammar Ghaddafi.

You see him here, and you see him there, ricocheting to meet President Obama, the King of Saudi Arabia, the Prime Minister of England...busy, busy , busy little King ...the occupier of Eastern Palestine who grants no citizen rights or permits for apartments to any Jews.

He must know...or maybe he doesn't....that the Palarabs have their sights set on Jordan just as soon as they finish with Israel. He is in a tight spot and unlike his late father he cannot achieve a modus vivendi with Israel which includes shared intelligence, protection of the palace and a de facto understanding about control of the West Bank. Oslo queered that deal forever and now the King is left promoting Palestinian Arab statehood at Israel's throat as well as his. He is not a butcher like Qaddafi or Assad. He is not a jihadist like Ahmedinejad or the heartless oppressors in Yemen and Somalia. He has no oil so he can't count on too much international concern.

His late father Hussein understood the shaky nature of his rule. In 1962 he penned a book named Uneasy Lies the Head. In it he wrote:

"I had seen enough of Europe even at 17 to know that its playgrounds were filled with ex-kings, some of whom lost their thrones because they did not understand the duties of a monarch. I was not going to become a permanent member of their swimming parties in the south of France."

For Abdullah II and his royal family the handwriting is on the wall. He will have to join the Eurotrash on the beaches of France. And lucky for Mr. and Mrs. Hashemite Hussein, they will sip and sup with enough haters of Jews and Israel to last them all the days of their lives.

The scam his family has perpetrated with the acquiescence of academics, media, supine Israeli leaders, is coming to an end. Uneasy lies the head. Abdication lies ahead.

Ruth King is a freelance writer. She has written a book and articles on gardening, and also writes a monthly column in OUTPOST, the publication of Americans for a Safe Israel (AFSI). This article was published May 16, 2011 in Family Security Matters (FSM)
http://www.familysecuritymatters.org/publications/ id.9516/pub_detail.asp