'A LIFE'S WORK' DESTROYED IN SAMARIA
by Nissan Ratzlav-Katz

(IsraelNN.com) The Botzer family, whose farm was demolished Monday morning by the military, described for Arutz Sheva Radio the loss they have suffered, saying it is far more than financial.

The Botzer farm, located adjacent to Mevo Dotan in the Shomron (Samaria) region, was destroyed Monday morning as part of the government crackdown on what have been defined as "unauthorized outposts" in lands liberated by Israel prior to the Six Day War. David and Shaina Botzer told Arutz Sheva that their farm is actually on state land within the municipal territory of Mevo Dotan, although west of the town's current residential area.

"My husband is a Navy commando and while he was planning to go to do his reserve duty, they came and dismantled his life's work. This was an animal pen worth tens of thousands of shekels. There were 50 heads of sheep there as part of an educational agricultural project that involves the area youth," Shaina said. The animal pen itself was subject to a demolition order, she said, but the order was in appeal before the proper authorities. In addition to the animal pen, the security forces also destroyed a stable that was not subject to the existing demolition order, Botzer added.

"The Navy commando unit is in my husband's blood," Shaina told Arutz Sheva. "The unit is part of him and now it is hard for him to go to reserve duty. He feels like he was stabbed in the back."

Shaina was further surprised to see that the workers brought in to carry out the physical destruction of their property were Arabs from a neighboring village. "I am stunned. It is a total shock when Arabs come and dismantle a Jewish farm when so many of their homes in the village below [our farm] are illegal," she explained.

When the workers were taking down the pen, they tried to chase away the sheep, but the animals tried with all their might to remain in the enclosure. "Even after the pen was dismantled [the sheep] ran back to the area where it had stood, but they came upon a pile of rubble," Shaina Botzer said. "It is so symbolic that they tried to return home."

The Shomron Liaison Office informed Israel National News on Monday that the Botzer ranch is "an educational farm which is located in a very difficult and strategic area and is an inspiration to the region's development."

"We will continue and support the efforts of the Botzer family and those who help them secure a Jewish presence in the Northern Shomron," the Liaison Office said. "We are now launching an emergency campaign to raise funds to rebuild the building that was destroyed."

"We are essentially protecting state land here," Shaina Botzer said, "and they took everything of ours apart. With G-d's help, we will start over again."

Editor's Addendum: The Government has sporadic activity against what they term "illegal" Jewish homes in Samaria and Judea. On November 16, 2009, the IDF destroy two homes in Neguhot: the home of Yehudit and Natan Ben David and their 6 children and the home of the Cohen family with one child. Pictures of the destruction are available at
http://picasaweb.google.com/dobiim4/ Negohot#slideshow/5404695190305934786

As the Women in Green write:

We must point out that the two homes were built within the community boundaries of the community of Neguhot. Neguhot is a community in the southern hills of Hevron, a 15 minute drive south of Kiryat Arba. One needs to drive on a road within the Palestinian Authority to get to Neguhot (a fact that in itself is a scandal). 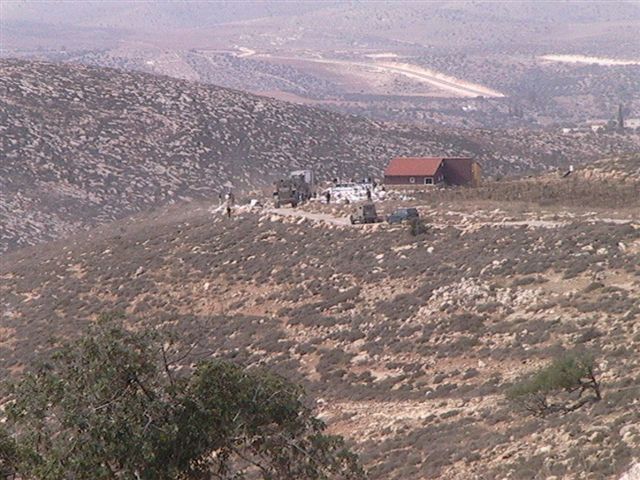 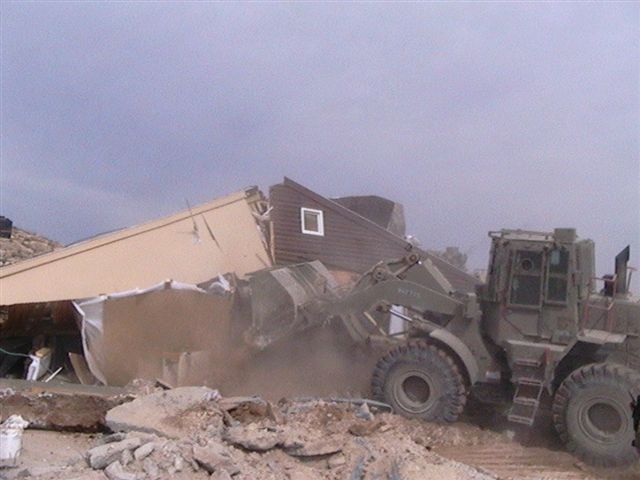 The scene reminded us of the devastating scenes of the destruction of Gush Katif. 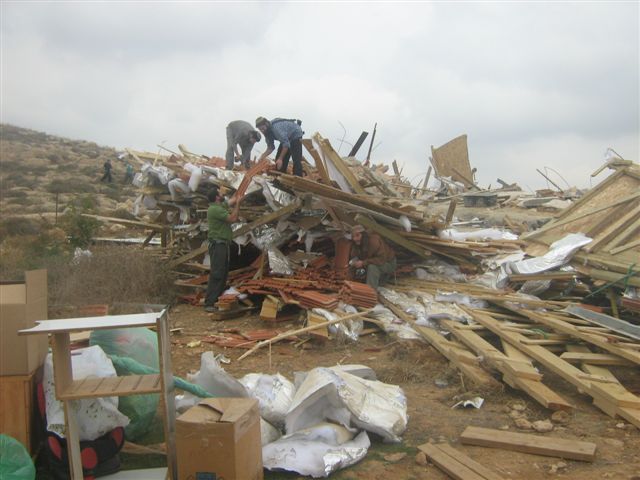 Among the pictures one can see how, after the destruction, Arab workmen hired by the army are evacuating the family piano and other belongings from the ruins. 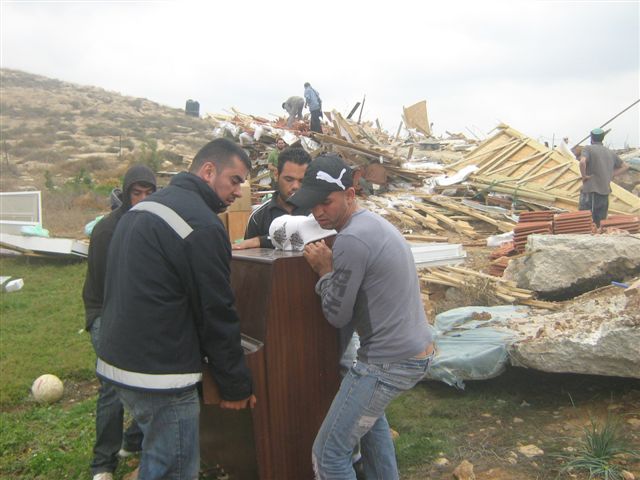 Arabs carrying off a piano.


The people of Israel returned to their Biblical homeland in order to build it and settle it.The pioneering families of Neguhot are imbued with this spirit and no force will succeed in stopping this.

The families are strong and determined to rebuild their homes. The pictures show the tent built a few minutes after the destruction, a tent in which they will live to keep a presence at the site. For donations for a new home, please call Miriam at 052-429 5557. 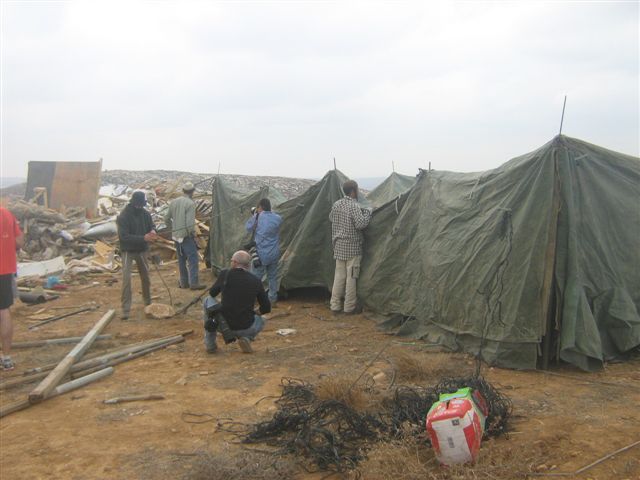 Jews putting up a new tent

COMMUNITIES FROM GUSH KATIF IN GAZA who now live in Samaria and Judea are also determined to rebuilt their lives. These are extraordinary people.

Click here to listen to a refugee from Ganei Tal, a beautiful community built in the sand dunes of Gaza. The Ganei Tal community is waiting for permission to rebuild their village on the lands of Hafetz Haim near the city of Ashdod. As Yuval Zaliouf writes about this community:

Friends, we hear a lot from a biased media about the fate of the so-called "Palestinians." What we hardly hear is about those who for 30 years built a legendary oasis in the desert, supplied work to thousands of Arabs and lived in relative peace side by side. The evicted Israelis left their green houses behind for the Arabs to nurture. Within days after the eviction the green houses were demolished for scraps by the Gaza Arabs. Today, Gaza is ruled by Iran's proxy Hamas and the world is called about to donate money to the poor "Palestinians."

A movie that remembers the destruction of Gush Katif may be seen here. It is called, "Gush Katif, from Destruction to Renewal." If you'd like to help rebuild these communities:

And visit http://www.gushkatif.org for updates.

Nissan Ratzlav-Katz writes for Arutz-7, where this article appeared on November 23, 2009
(http://www.israelnationalnews.com/News/News.aspx/134577).