EVIDENCE OF ANTI-SEMITISM AT THE EGYPT PROTESTS
by John Rosenthal

In response to my Pajamas Media article (Click here) documenting anti-Semitic imagery at the Egyptian protests, I've received several comments — both in public and in private — suggesting that, nevertheless, anti-Semitic and/or "anti-Zionist" sentiment among the protestors has played only a marginal role. The assurances to this effect are typically based on the first-hand accounts of Western observers or English-speaking participants with Western contacts. These accounts are supposed somehow to trump the clear pictorial evidence to the contrary.

The appearance of anti-Semitic and/or "anti-Zionist" motifs in the photos and videos of the protests is, however, simply too widespread and systematic for such assurances to reassure. Such images are to be found in video and photographic material from virtually every major Western news organization present in Egypt. This fact is all the more significant when one considers that the reports published or broadcast by these very same news organizations have as a rule outright ignored any anti-Semitic or anti-Israeli sentiment among the protestors. Indeed, as will be seen below, even more outrageous images figure prominently in the flickr streams of amateur local photographers. Herewith further evidence. 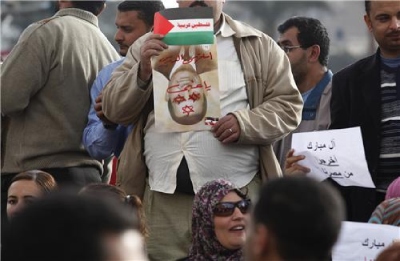 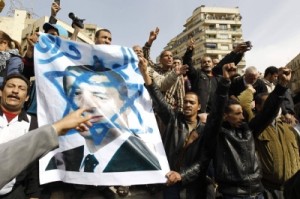 The below image is a rarely seen Reuters photo. According to the Reuters photo description, it shows the effigy of Hosni Mubarak that was famously hanged in Tahrir Square last Tuesday. Most of the photos of the hanging effigy that have appeared in the media consist of long-distance shots from behind. This close-up of the front of the effigy clearly reveals the Star of David painted on its tie. Note too the American dollars sticking out of one of its pockets. As shown in my last article, the effigy of Egyptian Vice President Omar Suleiman, which was also abused by protestors, likewise had a Star of David drawn on its tie.

The above photo and the second photo in the preceding series were both found on an English-language pro-protestor/anti-Mubarak discussion forum named the Hashem Studios Board. The thread from which they are taken is titled "The Egyptian Revolution." The thread is replete with anti-Israeli vitriol.

Such vitriol includes comments like: "Israel after we are done with Mubarak, we will come for you!!!" In response to the sarcastic question "Whats a pro mubarak protestor?," another commentator replies, "Yeah good question, does he look like this....," and posts the following cartoon. 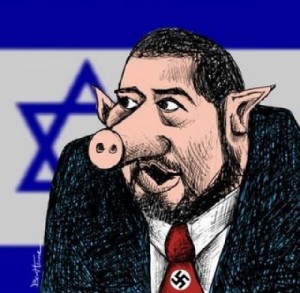 Protestors interviewed by CNN's Nick Robertson during the first week of demonstrations unleashed a remarkably similar torrent of hatred toward Israel and the United States. "He supporting Israel, Israel is our enemy, we hate him!" one female protestor screamed as regards Mubarak. And then she screamed some more: "Israel and America supported him, we hate them all!"

Whereas his female companion did nothing but spew hatred, a male protestor did at least bring up the aspirations of Egyptians to be free. This is what he said about them: "The United States stand beside Hosni Mubarak one hundred percent, because they know if Hosni Mubarak fell, the whole people in Egypt they gonna be free. And if the people free in Egypt, ... they gonna go free the Palestinians! They gonna destroy Israel! The country that controls the United States is Israel!" (The interview can be found on this video.)

Note that the evidence that I have assembled above and in my previous article is based solely upon searches of English- and German-language sources. It presumably represents just a fraction of the evidence that could be found in Arabic sources. To test this hypothesis, I did a flickr search on the name Mubarak in Arabic (مبارك). This led me to the following photos from the Egypt protests. 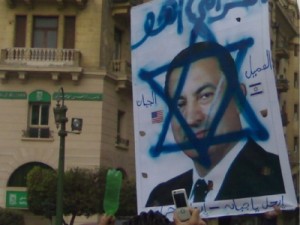 Ironically, the second-to-last photo above appears to have been taken in front of an office of the European Union. Here is a close-up detail.

It seems that the Western news organizations present in Egypt have been kindly "sparing" their audiences the most blatantly offensive images. The local photographers obviously have no such inhibitions.

The flickr streams make clear that most of the posters displayed at the demonstrations did not in fact contain any pictures or symbols at all. They consist of pure Arabic text. It would undoubtedly by highly revealing to have those posters translated. Translations of the Arabic text present on the above posters would be greatly appreciated.

John Rosenthal writes regularly on European politics for such publications as The Weekly Standard, Policy Review and The Daily Caller. More of his work can be found at www.trans-int.com.

This article appeared February 8, 2011 on the UCI website and is archived at
http://www.israelunitycoalition.org/news/?p=6340

The Press has also soft-pedaled other information about the attitudes of the Egyptian populace. Lawrence Solomon, executive director of Energy Probe and Urban Renaissance Institute, writing in the Financial Post February 5, 2011 said:

"The Arab protesters now on the streets of Cairo are calling for democracy, but what does democracy mean in a country that has only experienced dictatorships over its 5,000-year history? Polls of Egyptians taken by the Pew Global Attitudes Project and World-PublicOpinion.org at the University of Maryland provide us with insights. Egyptians as a whole do want democracy -- polls show 59% of Egyptians view democracy as "very good." But in the Egyptian mind, democratic rule implies something very different than it does to Westerners. Almost three-quarters of Egyptians wants to see the 'strict imposition of Sharia law,' more than half want men and women segregated in the workplace, 82% want adulterers to be stoned, 77% view whippings and cutting off of hands as proper punishment for theft, and 84% favour the death penalty for Muslims who leave their faith. All told, 91% of Egyptians want to keep 'Western values out of Islamic countries' (80% strongly), and 67% want 'to unify all Islamic countries into a single Islamic state or caliphate.' [...]

"The coexistence of democracy and Sharia law should come as no surprise: The chief proponent in Egypt over the last decade advocating democracy has been, in fact, the Muslim Brotherhood itself."

He also noted that "Mubarak officially banned female genital mutilation in 2007 -- Egypt had had the world's second-highest rate at 97%.

"In Egypt, 30 percent like Hizballah (66 percent don't). 49 percent are favorable toward Hamas (48 percent are negative); and 20 percent smile (72 percent frown) at al-Qaida. Roughly speaking, one-fifth of Egyptians applaud the most extreme Islamist terrorist group, while around one-third back revolutionary Islamists abroad. This doesn't tell us what proportion of Egyptians want an Islamist government at home, but it is an indicator."

In sum, people supposedly want democracy but it doesn't change their feelings about Israel. The people want democracy but as the February 2, 2011 Jihad Watch points out, "a desire for democracy does not guarantee a desire for human rights by standards Westerners would even recognize... Projecting a Western understanding of concepts like liberty, justice, and good government onto such terms as they are employed by those in favor of Sharia law (not to mention the Muslim Brotherhood) only sets up the naïve for profound disappointments and awful surprises."