THE HUNGER TO COME IN EGYPT
by Spengler

Egypt is running out of food, and, more gradually, running out of money with which to buy it. The most populous country in the Arab world shows all the symptoms of national bankruptcy - the kind that produced hyperinflation in several Latin American countries during the 1970s and 1980s - with a deadly difference: Egypt imports half its wheat, and the collapse of its external credit means starvation. The civil violence we have seen over the past few days foreshadows far worse to come.

The Arab uprisings began against a background of food insecurity, as rising demand from Asia priced the Arab poor out of the grain market (Food and failed Arab states,[1] Asia Times Online February 2, 2011). The chaotic political response, though, threatens to disrupt food supplies in the relative near term. Street violence will become the norm rather than the exception in Egyptian politics. All the discussion about Egypt's future political model and its prospective relations with Israel will be overshadowed by the country's inability to feed itself.

Egypt's political problems - violence against Coptic Christians, the resurgence of Islamism, and saber-rattling at Israel, for example - are not symptoms of economic failure. They have a life of their own. But even Islamists have to eat, and whatever political scenarios that the radical wing of Egyptian politic might envision will be aborted by hunger.

The Ministry of Solidarity and Social Justice is already forming "revolutionary committees" to mete out street justice to bakeries, propane dealers and street vendors who "charge more than the price prescribed by law", the Federation of Egyptian Radio and Television reported on May 3.

According to the ministry, "Thugs are in control of bread and butane prices" and "people's committees" are required to stop them. Posters on Egyptian news sites report sharp increases in bread prices, far in excess of the 11.5% inflation reported for April by the country's central bank. And increases in the price of bottled propane have made the cost of the most widely used cooking fuel prohibitive.

The collapse of Egypt's credit standing, meanwhile, has shut down trade financing for food imports, according to the chairman of the country's Food Industry Holding Company, Dr Ahmed al-Rakaibi, chairman of the Holding Company for Food Industries. Rakaibi warned of "an acute shortage in the production of food commodities manufactured locally, as well as a decline in imports of many goods, especially poultry, meats and oils". According to the country's statistics agency, only a month's supply of rice is on hand, and four months' supply of wheat.

The country's foreign exchange reserves have fallen by US$13 billion, or roughly a third during the first three months of the year, Reuters reported on May 5. The country lost $6 billion of official and $7 billion of unofficial reserves, and had only $24.5 billion on hand at the end of April. Capital flight probably explains most of the rapid decline. Egypt's currency has declined by only about 6% since January, despite substantial capital flight, due to market intervention by the central bank, but the rapid drawdown of reserves is unsustainable.

At this rate Egypt will be broke by September.

Egypt imported $55 billion worth of goods in 2009, but exported only $29 billion of goods. With the jump in food and energy prices, the same volume of imports would cost considerably more. Egypt closed the 2009 trade gap with about $15 billion in tourist revenues, and about $8 billion of remittances from Egyptian workers abroad. But tourism today is running at a fraction of last year's levels, and remittances are down by around half due to expulsion of Egyptian workers from Libya. Even without capital flight, Egypt is short perhaps $25 billion a year. 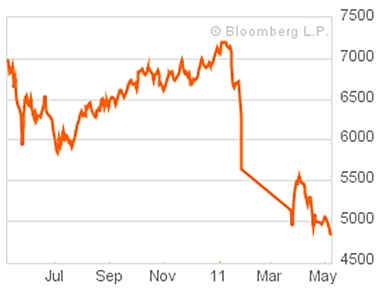 Price controls and currency depreciation have made it more profitable for wholesalers - including some employees of state companies - to export rice and cooking oil illegally. According to the daily al-Ahram, hoarding of rice by wholesalers has pushed up the price of the grain by 35% this year, while 200 containers per day are sold to Turkey and Syria.

"What is happening," the newspaper claims, is that traders are storing basic items such as rice and barley, hoarded in barns and in large quantities, and are reluctant to send it to the rice mills in order to raise the price of this strategic commodity". The al-Ahram report, headlined, "Conspiracy to Monopolize Rice," demands physical inspection of containers leaving Egyptian ports.

The rest of the story is predictable. Once the government relies on young men with guns to police its merchants, hoarding will only get worse. The Egyptian revolution has cracked down on the commercial elite that ran the country's economy for the past 60 years, and the elite will find ways to transfer as much of its wealth to safety as it can. The normal chain of distribution will break down and "revolutionary committees" will take control of increasingly scarce supplies. Farmers won't get fuel and fertilizer, and domestic supplies will fail.

It will look like the Latin American banana republics, but without the bananas. That is not meant in jest: few people actually starved to death in the Latin inflations. Egypt, which imports half its wheat and a great deal of the rest of its food, will actually starve.

Revolutions don't only kill their children. They kill a great many ordinary people. The 1921 famine after the Russian civil war killed an estimated five million people, and casualties on the same scale are quite possible in Egypt as well. Half of Egyptians live on $2 a day, and that $2 is about to collapse along with the national currency, and the result will be a catastrophe of, well, biblical proportions.

Spengler is channeled by David P Goldman. Comment on this article in Spengler's Expat Bar forum.